[This issue, we sit down with noted polytheist philosopher and author, Edward P. Butler. Butler, who has just released Essays on Hellenic Theology, here discusses comparative religious studies (and its attendant dangers), what revivalist polytheisms may learn from extant traditions, and the place of Pagan theology in academia.]

Edward P. Butler: Thank you! I use “theology” in a technical sense derived from Proclus. He distinguishes between “philosophy” and “theology”, even though his “philosophical” writings deal with the Gods quite a bit. But for him, “philosophy”, when it discusses the Gods, does so in a purely formalizing manner. We can see this most clearly from the complete lack of proper names of deities in a text of his like the Elements of Theology. (We don’t know, by the way, whether that name was given to the text by Proclus himself.) The key way in which common nouns differ from proper names is that the former can be translated, the latter cannot. Iamblichus, in an important passage from his book On the Mysteries (VII. 4-5, 254-260), explains why Greeks shouldn’t translate the proper names of foreign Gods into the proper names of Greek ones. This was a position that became authoritative for late antique Platonists, and which I think is really a prerequisite for even beginning to understand polytheism. Philosophy, in this sense, talks about the Gods strictly in ways that are translatable, at least in principle. This means that we are never speaking philosophically about individual Gods, but always about classes or kinds of Gods.

“Theology”, by contrast, is used by Proclus to refer to the theophanic texts of actual traditions, so that mythic poets, framers of ritual and diviners are the kind of people he means by “theologians”. This is the original use of the term “theology”, which goes back at least to Plato himself, who provides the first documented use of the term. Theologoi are people who talk about the Gods, and in the primary sense this means people speaking about particular Gods, not about “Gods” in general. And Platonists like Proclus or Damascius would use the term “theology” to refer to the sacred primary texts of any other tradition, not just the Hellenic. So I call it “theology” when I write things within a tradition in this sense, talking about proper-named deities in ways not translatable into talk about classes of Gods.

As for why Hellenic theology, that’s a simpler answer. The other tradition about which I have written “theologically” is Egyptian (Kemetic), but most of that was in the context of my Theological Encyclopedia of the Netjeru, which is quite accessible in its online form. These Hellenic essays, however, were previously only available in the various separate devotional volumes in which they’d originally appeared, and I’d always intended to publish a collection of them at some point. I was waiting for there to be enough of them to make a decent-sized book, and also to allow the latest of them to be available exclusively in the devotional format for at least some time.

EHS: One of the essays, entitled “The Ashwins and the Dioskouroi,” compares sets of divine twins from the Hindu and Hellenic pantheons. How do you go about such cross-cultural theological work? Are there pitfalls to be wary of, or particular approaches that work best?

EPB: Comparative work is very dangerous, in my opinion, and part of what I was doing in that essay was to demonstrate how I feel it should be done. In that essay, I try to show how even for deities often considered an open-and-shut case of cultural diffusion and identity across pantheons, there is actually no necessity to posit such an identity. The analogous functions of the deities can explain their common features —even striking ones such as being twins and also associated with horses — without needing to posit cultural diffusion. I don’t care if diffusion actually took place: I’m simply concerned to point out that we don’t have to resort to it just because there are certain symbols common to these Gods.

I have undertaken comparative work very rarely, and it isn’t something I encourage. It is just too easy to think that one knows enough about two traditions to compare them properly, but be mistaken. If one is going to do comparative work, the crucial thing is to understand that traditions can only properly be compared whole-to-whole, not part-to-part. That is, the total structure of one system needs to be compared to the total structure of the other. Otherwise, we end up comparing elements that are superficially similar, but actually different in function. Pointing out the differences really ought to be the goal in comparative work, because that’s what aids discernment, but usually in comparative work people are concerned with similarities, and indeed, all too often their entire goal is to reduce the different to the same as quickly as possible. The whole field of comparative religion has thus demonstrated more ignorance than wisdom. 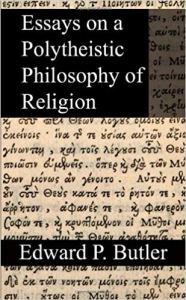 EHS: And what do you think reconstructionist polytheisms can learn from extant traditions, such as Hinduism and Shinto?

EPB: I think that revivalist or reconstructionist polytheisms have everything to learn from continuous traditions. Moreover, every indigenous polytheism in the world is critically endangered, and I believe that it is morally incumbent upon us to be allies of these traditions in their struggles, in whatever ways we can. This begins from being willing to listen a lot more than we speak, and being aware of our privilege and of the legacies of Western colonialism and racism. We need not to be quick to judge people involved in those struggles according to our own categories, or to dictate to them what ought to be their priorities. We need to develop trust and dialogue with these traditions, so that we can learn from one another and figure out how best to aid one another in the common struggle to defend polytheism and advance it in the world. We need to understand the violence monotheism has perpetrated upon these cultures, not only through missionary activity, but also through the imposition of conceptual frameworks themselves suffused with monotheist assumptions.

EHS: What is the current state of “pagan studies” in academia? And is there a place for scholarship such as this?

EPB: It’s not really for me to say, inasmuch as “Pagan Studies” has never been my field. Pagan Studies is an anthropological discipline. I can’t work within that paradigm, because anthropology treats religious phenomena purely as patterns of human behavior, whereas my concern, whether in my “philosophical” or my “theological” work, is with the Gods Themselves. That being said, it is evident that Pagan Studies has been under a great deal of pressure within the broader field of Religious Studies. Its ability to operate under that paradigm has been challenged in large part because Pagans have tried to make of Pagan Studies something that it cannot be as presently constituted.

Pagan Studies has been challenged on two fronts: first, that it has too many “insiders” studying their own traditions, and second, that it posits, explicitly or implicitly, continuities between ancient traditions and their modern revivals. And from the viewpoint of anthropology as it presently stands, these are somewhat legitimate criticisms. (I can’t speak here to its possible fortunes under a comprehensive revisioning of anthropology’s theoretical foundation, such as has been proposed by Eduardo Viveiros de Castro.) But then I don’t think that many people would find “Pagan Studies” very interesting either to write or to read if it did observe those boundaries.

What Pagans want, and deserve, is the option to do what is called “Theology” in the modern academic context — not the anthropology of religion, not the history of religion, but the hermeneutics of their traditions from the “inside”, as exegetes of the traces left by the presence of their living Gods in history. This is what Christians do in “Theology”, as it is known in contemporary academia, and it is closed to us, not for any good or profound reasons, but as an undeniable institutional fact.

EPB: Lots of things, including contributions to a couple of forthcoming devotionals. In that regard, I’d like to take a moment here to thank the editors of all the volumes in which these essays originally appeared, and in particular your own tireless efforts on behalf of Bibliotheca Alexandrina. BA’s devotionals have made a lasting contribution to the revival of polytheist worship. Every one of them testifies to the depth and passion of our community’s devotion to their Gods and to the full spectrum of ways in which that devotion is expressed.