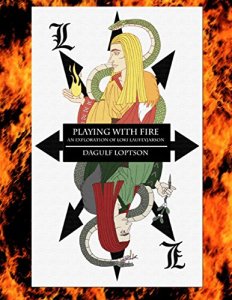 [This issue, we sit down for a quick interview with Dagulf Loptson. The author of Playing With Fire: An Exploration of Loki Laufeyjarson, Loptson here discusses the Norse Loki, his personal spiritual path, and his upcoming projects.]

Eternal Haunted Summer: How would you describe your personal spiritual path? Are you part of a specific tradition, or more solo and eclectic?

Dagulf Loptson: My spiritual path has gone through many evolutions and transformations. I first began identifying as a Pagan when I was in grade school and Loki had stepped into my life. That was the first time I ever intensely “clicked’ with a deity, and he’s been at the center of my devotional life since then. When I was really young I was practicing a solitary blend of Witchcraft and Heathenry, and stepped further towards the Heathen community as I got older. I’ve worked in both covens and kindreds, but have always maintained a solo practice whether I’ve been in a group or not. Since that time I’ve had the opportunity to meet teachers from a variety of traditions and have stepped into some of them. Currently I would say that my Anderson Feri Training and my personal devotions to Loki and his family have become the spiritual hub around which everything else revolves.

EHS: Though a devotee of Loki, you also honor other Deities. How do you balance your devotional responsibilities? Do you have any advice for those who find themselves dealing with multiple pantheons?

DL: I do honor many deities in my own life. I don’t typically go seeking more deities out, and almost all of those relationships were formed naturally after they had made their presence known in my life through dreams or signs in my waking life.

I think I manage this in a similar way that someone might maintain a larger circle of friends and family. There are some relationships that take a stronger priority in my devotional life, just as there are some people in your life you spend time with every day and some people you spend time with every week, or even just on the holidays. You check in on the people you love and contribute to relationships that matter to you.

I do not think that the “cultural boundaries” we encounter the gods within are invisible barriers that prevent them from interacting with devotees or deities from other cultures. I have yet to see a deity ignore a devotee because they weren’t practicing the “right kind” of religion, and don’t find them to be as limited in scope as humans can be. Working with multiple deities can be challenging, as their respective traditions also come with a lineage of ancestors and the rules and taboos that they created to serve in their interactions with their gods, so that is something to be mindful of. Ultimately, if you’re being conscientious, loving, and respectful of your gods, I don’t think you can go wrong.

EHS: Your book, Playing with Fire, deals with the Norse Loki. How did you go about writing this book? What was the impetus behind it?

DL: I finished writing Playing with Fire in 2011, but it took another four years and passing through four publishers until it was put out by Asphodel Press. Back then I was strongly identifying as Heathen and was a member of the Troth. Things have improved slightly, but back then there was a lot more anti-Loki / anti-Lokean rhetoric floating around in the Heathen community. If you mentioned that you were a worshipper of Loki you had to be ready to bend over backwards trying to prove that you were an honorable person and prepare for a parade of people itching to tell you about how Loki was evil, how you were an idiot for worshipping him, how nobody ever worshipped him, et cetera. Most of the attacks I observed against Loki and his followers were largely coming from groups of people who either were operating from a lazy interpretation of Snorri’s Edda and bad scholarship like Viktor Rydberg’s, or from their presumptions about Loki that were based on hearsay rather than experience. My research about Loki had led me to believe that many assumptions about Loki and his character either were incomplete or inaccurate, so the book was born out of a desire to make that information available in one place: both for people wanting to know more about Loki and for Lokeans who might want access to more complete information about him.

EHS: You also blog at Polytheist.com. What are some subjects you look forward to tackling in your column?

DL: I haven’t written for Polytheist for a long time, since the site has been on an indefinite hiatus. I’m currently working on my own blog which can be found at Lokicult.com. I still write about Loki with his family, but also am looking forward to writing more about mysticism, magic, Norse spirituality/spiritual technology, Traditional Witchcraft, and my work in the Anderson Feri Tradition.

DL: I recently wrote a small, introductory book about Loki for Moon Books. This is in their Pagan Portals series and will be titled Loki: Trickster and Transformer. I tried to equally make it an introduction to who Loki is and also how to build a functional devotional practice for him.  I have a few more ideas planned for the future: some still pertaining to Loki specifically, some about aspects of Witchcraft/ Feri. Stay tuned!