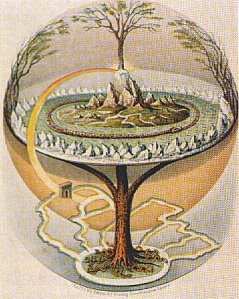 On the internet and in the news media, unfortunately, one will come across the completely whacked-out idea that heathenry has something to do with racism. (I’m part Native American, so, I would not have been welcomed in heathenry if that were true.) Whether one is talking about universalist heathen sects (which are inclusive by charter), or folkish sects attempting to recreate specific tribalisms with descendants of specific tribes, the concepts of race and race purity just do not fit in heathen religion and mythology. The idea of race is a modern concept.

The ancient heathens were tribal peoples. The Saxons and the Celts did not think of themselves as the same people. They were different tribes with different languages and different gods. They were “other” to each other, and yet, they also intermarried. Heathens of the ancient world traded, raided, married, and had sex with pretty much any group of people they encountered. They had no concept of racial purity. If a Norse Viking brought a Celtic woman home to Norway and they had a son raised in his village, he was Norse. Adoption and fostering of children and the mutual adoption of adults through blood-brotherhood ceremonies were common and accepted practices, and once one was adopted, one was just as much family as birth family was. That was the practice among humans, and it was the practice among the gods in the mythology stories those humans told.

The gods in Norse mythology are pretty much the same gods as in other Germanic cultures, with a few regional variations. But the mythology we have to work with was largely written down in Icelandic because Iceland happened to be the last heathen / pagan culture to convert to Christianity, in the year 1000. There are other texts to work with that were written by ancient Romans and Arabs in explaining the heathen cultures, but the stories we tell of the gods are pretty much the ones written down a few hundred years after the conversion, in Old Norse and Old Icelandic. This presents challenges in reconstructing exactly what the ancient heathens actually believed.

One thing that is absolutely clear, though, is that Asgard was not filled with a single race of beings, but with at least three and possible four species, all living together (though not quite in harmony— the stories in the myths have drama, and drama doesn’t happen in perfect peace and love). Those races were the Aesir, the Vanir, and the Jotnar (giants.) The Jotnar could be further divided into ice giants and fire giants. No matter which any of them originated as, they were all generally called Aesir, and in the official Asatru religious organization in Iceland, they still are.

Here is the Ásatrúarfélagið page of Aesir (the gods): http://asatru.is/aesir

Further, the Aesir evolved from the giants. Every god in the older generation, including Odin and Tyr, had parents who were giants. And the Aesir kept producing more children with giants. Thor is Odin’s son by a giantess called either Fjorgyn or Jord. Vali is Odin’s son by the giantess Rindr. Magni and Modi are Thor’s sons by the giantess Jarnsaxa. This is not a society that only marries within its own race, even in the line of the king.

Further, there are beings in the mythology who were treated as gods, including the Norns, and the giant Surtr to whom a sacrifice was given in a verified historical account, who were not counted as Aesir— because they did not live in Asgard. Asgard is a model of a citizenship-based society. Live within the walled city, uphold its society, obey its rules and its king, eat of the collectively distributed immortality food provided by Idunna, and one is a citizen of Asgard and the object of worship by Asatruars regardless of racial origin.

Some of the Jotun-born gods in Asgard have ties to other Aesir beyond citizenship. Notably, Skadhi first married Njord (who is Vanir) and then divorced him and married Ullr (who was born Jotun) and Loki became blood-brother to Odin (Aesir but with Jotnar parents) and married Sigyn (an Asynja.) But others, like Eir, just plain joined the society. The Vanir are technically hostages, which in the ancient world meant nobility permanently hosted by former enemies in war whose presence ensures peace, but they are counted among the Aesir as well, because citizenship is more socially important than birth race.

Asatru is a religion that worships gods of different races living in a multi-racial society. Heathenry is the last place on Earth where racists ought to feel at all comfortable.

9 thoughts on “Asgard as a Multi-Racial Society”