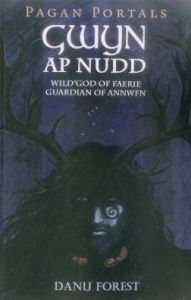 Danu Forest’s Gwyn Ap Nudd is a well-written exploration of the Welsh god Gwyn ap Nudd. Known as the guardian of Annwfn and King of the Tylwth Teg (the faeries), Gwyn ap Nudd is the Winter King, the Brenin Llwyd, ‘the gray king in the mist,’ as Forest tells us.

There are various cultural connections presented: the name ‘Gwyn’ meaning ‘fair’ relates to the Irish Fionn MacCumhail, the ‘Fair,’ and both are derived from the ancient Celtic Vindonnus, a god of light. As well, ‘Nudd,’ (mist) is related to Lludd Llaw Erient, Lludd (or Nudd) of the Silver Hand. These names are related to the lost British god Nodens, a god of healing, hunting, dreams, and the sea. Thus, Gwyn ap Nudd, the ‘White Son of the Mist,’ is a lord of transition and change, his rule of Annwfn a natural progression of his role as the Faerie King.

Danu Forest gives readers a beautiful meditation as a practice to seek Gwyn ap Nudd. “Seek him out wherever the wind blows,” Forest tells us; “seek him in mist and starlight upon water, and when the geese pass by on winter evenings.” I will not repeat the entire meditation here, but it touched me so deeply that I copied it into my journal for repeated reflection.

Forest encourages seekers to go out into nature, find a space that speaks to you, and invoke the spirit of Gwyn ap Nudd. The invocation encourages one to be present and experience your surroundings: listen to the birds and insects, feel the breeze passing over you. Listen to your heart, and you may realize that Gwyn ap Nudd has given you a message.

Further on Forest introduces us to Gwyn ap Nudd’s realm of Annwfn, the land of Faerie. Because the name translate to ‘the deep place,’ the connotations of inner spirit became lost, and the realm became stigmatized as the Christian Hell.

Within Annwfn is kept the cauldron of Dyrnwch the Giant, one of the thirteen treasures of Britain; another cauldron of legend is that of Bran the Blessed. Both gave rise to the legend of the grail and its role as the vitality of the land of Britain. Forest analyzes the poem Priei ddeu Annwfn (The Spoils of Annwn) to help readers explore and understand the many fortresses (caers) that make up the mysterious realm Gwyn ap Nudd rules. By visiting each caer, the seeker gains understanding and insight: a shift in consciousness; knowledge of the land on which the seeker dwells; rebirth; scrying; connection with the ancestors, or astrological study. With relation to this, Forest offers a cauldron scrying exercise in which one might seek visions for their own spiritual quest. (I have not tried this exercise as yet, but intend to.)

One segment of Forest’s book I found particularly engaging on a personal level was the ‘Gwragedd Annwfn,’ the wives of Annwfn, female spirits with healing skills. I am a Reiki Master, and have named my practice Myddfai Reiki after the legendary Physicians of Myddfai, healers that traced their ancestry to one of the Gwragedd Annwfn. While my family does have Welsh, or Cymric, ancestry,  we are not of the family of Rhiwallon; I chose the name as a nod to the shadowy heritage I am only beginning to explore.

Something I am rather lax in is making offerings to the Faerie companions and guardians that may be around my home. I have noticed lately that energy has been stagnant and our luck rather dicey. An offering to the Faerie, especially as laid out by Forest, is a simple and kindly way to establish good relations with the Fair Folk. She reminds us that natural gifts are best and leave no trace behind them. The key, Forest tells us, is to give with genuine generosity and good will. Following this, Forest gives readers another meditation, this one to meet Gwyn ap Nudd and members of the Faerie Court.

Another chapter that resonated with me was ‘Encountering Sovereignty,’ a theme that I recently wrote about for another publication. Forest tells us that the figure of sovereignty is a recurring theme throughout Celtic and Arthurian mythos representing the soul of the land. Sovereignty is generally represented as female (the cauldron or chalice or grail her womb), her appearance changeable: an animal, a crone, or a Faerie Queen. Forest says: “In some ways sovereignty is something that is always fought for; it cannot come easily from birthright or any political system. It is a place of harmony and balance where all is literally ‘all right with the world,’ a state of blessedness and wholeness.” Most clearly, “If we are not sovereign in our own lives we can be sure someone or something else is, and that must be tackled if we are to recover our own soul’s treasure.” (Italics the reviewer’s own).  It was only through acknowledging my own sovereignty that I have realized who it is I am meant to be and that that person is different from who I thought I wanted to be (rather convoluted there, but altogether true).

I found Gwyn Ap Nudd to be an insightful book, and it will be a useful tool in expanding and reestablishing my spiritual practice. I was unfamiliar with the figure of Gwyn ap Nudd as I have not studied much traditional Welsh mythology. This was an excellent introduction. Danu Forest gives readers background associations with other cultural mythos then moves into differing aspects of the figure as godhead and how seekers can identify with Gwyn ap Nudd’s various roles.

At the time that I wrote this review I had read the book three times and found several pieces that resonated with me and have added the meditations to my journal for further contemplation. I highly recommend Danu Forest’s Gwyn Ap Nudd to those seeking insight into their psyche and soul as well as students of Celtic and Welsh mythos, or those exploring the realms of mystery.