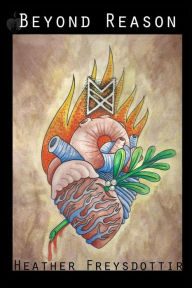 Beyond Reason is nonfiction work about being a godspouse of Loki. It also contains some poetry and recipes. This is neither an academic paper nor a devotional, but more of an autobiographical account of the author’s experiences. I recommend it for the general reader interested in Loki or in what it is like to be a godspouse.

Freysdottir is a pagan and witch rather than a heathen. The author grew up in a culture that believed in magic and spirits, i.e. the rural Cajun culture.

The author goes into some general how-to for spirit workers wondering how to process personal gnosis and figure out if they are really hearing a god, which Freysdottir terms discernment. However, the main focus of the book is descriptive rather than prescriptive. This is about how it feels to do this capital-w Work.

Like other godspouses, the author developed a “godphone.” She indicates that working intimately with a deity can sometimes be terrifying, but that it is rewarding, and that ultimately the godspouse relationship is about love.

The author’s conversion experience from Christianity to paganism came from reading a book about Irish history, in which there was a woman who lived unoppressed. Christianity did not offer her a similar model for a feminist woman.

Loki first spoke to her as her muse, helping her write. Only later did she realize he was a being separate from herself. There are many commonalities between Freysdottir’s experiences and my own, and that is one of them. Like me, she saw a movie in which Loki was depicted and then tried to write something more authentic than what she had just seen, and that was Loki’s avenue into her mind and mine. Since her journey was different than mine because she needed different things, her experience of Loki also differs from mine in some respects, but I recognize that snarky, highly personal voice of Loki in the internal conversations she had with him. Loki is not a remote and impersonal god.

Freysdottir alternates between expressing her life with Loki as linear story and as poetry of the moment. The poem about Loki’s true form is particularly insightful.

The author goes into her experiences with other gods, including the story of why she is named Freysdottir. Unlike me, Freysdottir has a goddess aspect herself, being Heith in mortal form. The author’s ruminations on what a physical body can offer resonated with me.

A couple of chapters start with a summary of information in previous chapters, as if the reader might not have seen earlier material. This shows these chapters’ origin as blog posts. Fans of the blog may have already read a lot of what is in this book. However, if one wants to read it again, it’s handy to have it all in one place. The poetry is the sort of thing one might read over and over. The rituals, recipes, and prayers are also things the reader might want to keep in book form.

The heart recipe has personal meaning for Freysdottir because of her gnosis that she is Heith, and that Heith is Gullveig, who was burned and came back to life, and that where the lore says Loki ate a burned witch’s heart, that it was Gullveig’s heart that Loki ate. Cooking hearts and offering them to Loki re-enacts an event in the lore that the author associates with giving her own heart to the god she loves. Readers may or may not resonate with this. As I personally associate Gullveig with Freya, I don’t connect with the idea behind the heart ritual, although I understand it intellectually.

Although this book is about the author’s personal journey and her relationship with Loki, it also contains some advice. Freysdottir makes it clear that different people will experience different aspects of Loki, and that is not just OK but expected. He won’t  be the same to everyone. Everyone has different things to offer him, and everyone’s journey is different. Because the author describes but does not dictate when writing about Loki, and about godspousery, and about mysticism in general, this book adds greatly to the ongoing conversation on these topics without falling into the trap of thinking that there is only one right way. I recommend this book for anyone interested in finding out about godspousery, especially other godspouses who may be looking to see if other people have similar experiences. I also recommend this book for the general, non-academic reader curious about Loki.