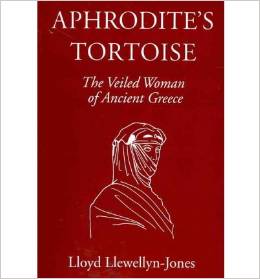 I came across this gem of a book through a discussion in one of the Facebook groups that center around veiling practices among pagan women. I’ve been veiling on occasion at the request of my god since 2006, and in 2008 I moved to veiling full time. The subject of veiling – both ancient and modern practices – fascinates me. Why do we veil? Which religions ask such of their women, and why? In a post 9/11 world, there is a certain stigma especially around Islamic women who embrace the hijab, and while there are those who have little choice over whether or not they veil, there are just as many women who choose to adopt the hijab. It’s a concept that many Western women, and people in general, find perplexing. Why on earth would someone choose to do this thing? As a pagan woman who veils, I can tell you that the most negative push-back I’ve gotten over my choice to cover has come from other Pagans. Modesty isn’t one of those things that we do, right? We celebrate our bodies and the earth, we embrace the carnal, fecundity, the cycle of life of which sex is such an important part. Modesty and humility before the gods – that’s not our thing, that’s their thing, that’s something that they do. Words have filtered into my devotional life – grace, compassion, humility, modesty – that reek of Christianity, and every since I began veiling, this is something that I’ve had to sit with. These words belong within the Abrahamic frameworks, not within the Pagan framework. With it, too, should be the veiling practice. They do that, not us.

And then, here, this book came onto my radar! Women veiling. Pagan women veiling, in ancient Greece. Before monotheism became the big thing that it would later become. How wonderful! How delightful! No, I don’t need historical precedence to legitimize my veiling practice – it is something that my god asks me to do, and that is what living traditions are about. But, how exciting, to look into the past and see what our spiritual ancestors were doing, and why. Why were they veiling? What was the religious significance? What might we have in common?

This book was invaluable to me when it comes to providing alternative terms to use, for veiling styles. A trouble we have in the Pagan veiling community is a lack of non-other-religious terms to use for how we tie fabric upon our heads. Hijab, for example, as a practice has more to it than simply fabric placed upon the head, and it’s a concept that males within the faith often aspire to as well. While tichel (Yiddish for ‘kerchief’) may be less specific than Hijab (the corresponding concept within Judaism would be tznuit), ‘tichel’ as a term does have a strong association with a particular way of veiling within Judaism. For the record, the veiling style I favor is one modeled after tichel wrapping, and so I often will say, I wear my veils tichel-style.

The author starts off pointing out that, when speaking of historical veiling the world around, it is hard to come to a consensus regarding the word ‘veiling’ anyway. What do you think of when you think of veiling? For some, it requires fabric obscuring the whole face (think of mourning veils). For others it means cloth over the crown of the head, and for some it could be as little as a headband or some other wrap that allows hair to show. With regards to the time period the author is concerned with (900 BCE to 200 CE), when considering art and also text based evidence, we often come across ‘mantle’ rather than ‘veil’ as a word, and the author argues that we need to keep in mind our Western anti-veil bias and, as importantly, to keep in mind the biases that the translators would have had, and their reluctance to use the word ‘veil’.

This isn’t a perfect book. The evidence that is gleamed from both art and from text can be frustrating. The treatment of women in these societies, which does not correspond with the treatment of women in art (that is, the seeming abundance of naked, exposed women in art was not how women went about in actual life) leaves much to be desired, and the author admits to filling in gaps by looking at modern day veiling societies. A good case is made, however, for the idea that women in ancient Greece veiled, by custom, a lot more thoroughly than we generally consider. First, we have all the terms: epiblēmata and periblēma, and their associated words which mean ‘to throw over’ – cloth that could be thrown over the body, generally thought to act as cloaks, but could be used as a veil. There’s mitra, which could be called a fillet or a head cloth, that was similarly wrapped or otherwise placed about the head. There’s ampekhonē (deriving from ampekhomia, ‘to drape’); krēdemnon, kaluptrē, kalumma, and the words that derive from those. And those are just the words that can be translated into ‘veil’. Then there are the more style-specific terms. Just as today there are a myriad of terms for veiling styles within veiled societies (chador, izar, sari, miláyeh, niqab, etc.), within the ancient Greek world we find an assortment of different styles: shaal veils, which were shoulder length and left the face exposed; pharos veils, which were longer and is generally what one refers to as a mantle. They could be elaborate or plain, and the amount of the fabric could vary quite a bit. In places, hats called tholia were incorporated into the pharos veil. There’s himation veils (possibly the most well known?), the kolpos veil – and those are the full body veils. Face veils are also attested, in two styles. Tegidion allow for eye holes to be cut out of the cloth covering the face. The second style, which we lack a Hellenic term for, is extremely similar to the Yemeni maghmuq. This veil has no eye holes cut out, and the idea is that the material was so sheer as to render them unnecessary.

Delving into this book brought home what I suspected going into it: I wasn’t going to find any religious common threads with these spiritual ancestors, beyond simply that they worshipped some of the same gods I worship. We are millennia apart; we are cultures apart. While there are aspects of the past that I find appealing (I admit it; I find a strong division between ‘public sphere’ and ‘private sphere’ appealing, and I wish in our culture we honored the sanctity of the private sphere more than we do) I also acknowledge freely that too many people minding their own business opens up far too much opportunity for those with less power (generally women and children) to be horribly abused. These veiling practices were less about religious observations and more about controlling social order. That is, the men controlling social order. I came away from this fascinating read with a need to sit with my own veiling practices, to explore my motives and my associations all over again.

In the end, this book has strengthened my commitment to veiling for my god. I know that He is not trying to control the smallest aspects of my life, nor does He think I’m a lesser being simply because I’m female. I know that I enjoy the small amount of set-aparted-ness that veiling provides me with. (Most people don’t try to flirt with me, even in a friendly way; I’m treated more like an adult that I had been treated previously). I do not need the past to validate my existence or my practices; I do not need the past to authenticate my relationship with my god.

Still, anyone with an eye toward the Hellenic past, or curious about the veiling practices of some Pagans in some parts of the world would find this book well worth a read.

[Jolene Dawe is a polytheist devoted to Poseidon and Odin. She is the author of Treasures from the Deep, a collection of Poseidon’s myths retold, and The Fairy Queen of Spencer’s Butte and Other Tales. She lives in the Pacific Northwest with her partner, a small horde of cats, one small dog, and three spunky spinning wheels. You can find her online at http://thesaturatedpage.wordpress.com%5D.]