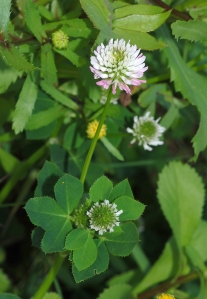 Lugh rarely felt this relaxed. He sat cross legged by the fire pit, absentmindedly petting Salis’s fur. Not quite the bonfires of old, he chuckled to himself, but it gets the job done. The humid night air, the chirping crickets and the crackling fire filled him with a sense of ease. Around the fire, the group told stories of microbrew beers and organic hops. He sipped the latest story from a glass stein as they chatted about the latest in farm permaculture. They always left a seat open for him, even as they switched from one story partner to another. It was a small gesture, but Lugh noticed and appreciated the effort.  A light breeze blew across the back of his neck and he looked across the yard to see Airmed weaving clover bracelets with some of the children.

Earlier in the evening, a young woman named Alice gathered clover, mint, chamomile and thyme and showed the children how to weave crowns and bracelets with the stems. Their laughter had charmed Airmed. She sat amongst them in the soft grass bringing cool breezes and helping small hands with intricate designs. Her own hair hung in loose braids with flowers tucked in the plaits. She noticed Lugh watching and threw him a contented smile.

Fairy lights lit up the garden and  an older group of children who thought they were no doubt waiting patiently caught Lugh’s attention. They surveyed and skipped between piles of toy light sabers, divided into two across the yard. Their hilts were decorated with ribbons, oak and holly leaves. A girl and a boy practiced sword skills with found branches, the bells on their feet gingerly ringing. The Morrigan sisters watched the pair intently and Lugh was wondering if they had taken bets on the winner.  He sighed and inhaled the sweet smoke of slow cooking barbeque.

Soft chimes filled the air, presumably from the digital clock hanging above the patio door. Lugh supposed the countdown clock was a way to keep the children’s questions at bay, but he still heard a fair share of “Is it time yet?” throughout the evening.

Giddy squeals and cheers came from the children, even as the adults were heading over to gently shhh them. The drummers formed the edges of a loose circle and everyone else filled in. Once the drumming began, the children quieted. Through the slow, low melodic tones, the mood was set. Everyone moved with the knowing of their place; some were drumming, some were carrying water or fire or incense, others swaying to the steady beat. Lugh smiled to himself at the simple pleasure of not having to explain. Sometimes it was nice to be with folks who just know.

Airmed and the Morrigan sisters joined Lugh as the group opened the circle and invoked their names. Airmed smiled playfully as the sisters mocked a smile. The night sky was dark as the suburban houses would let it, but the moon made up for it when she peeked from behind a grey cloud. In the circle, time stood still, time stretched out and then time passed again.

When the circle was broken, the adults and children alike headed to a saber pile. One by one, the plastic swords lit up blue or red in the night. The drumming continued until everyone had chosen a saber. Lugh could see the glee in the Morrigan’s faces. As the oak side’s challenger stepped out, the drumming came to an abrupt stop. Everyone on the oak side raised their sabers but only one voice rang out.

“Holly King, the time for your reign has ended. Meet me and face an honorable death.”

The holly side raised their sabers as their champion called back, “Let a fair and honorable duel begin.”

In the last moments of silence before the battle commenced, Lugh watched as Babd took her crow form and circled over head. She cast her moonlit shadow upon the soon-to-be winner.

The drums picked back up and the yard was aglow with sabers in green and blue pairs. The clacks, swish, slap sounds followed the cadence set by the drummers. The speed picked up and at last the Holly King and holly side fell to their ground, some more dramatically than others.

Against the scene, only one woman moved. Dressed in silver and white, she walked slowly to the center of the battlefield, Airmed guiding her by the arm to the center of the battle where the Holly King had fallen. “We are all part of the light and dark, the sun and moon, the oak and the holly. Let us remember that neither can exist without the other. So the wheel turns.”

A chorus of “So mote it be” rose around her.

Airmed let go of the woman’s arm and pranced over to Lugh. She rested her head against his arm. “Summer was is my favorite time of year,” she said. A cheer went up at the promise of roasted marshmallows. Even the Morrigan smirked at that.

And so the night continued. Eventually, sleeping bags were set out under the stars and children feel asleep. Adults drifted indoors to bedrooms or waved goodbyes and biked or drove home. Lugh watched the fire as dawn crept into the sky, satisfied that summer was never ending and just beginning.

[Surrounded by muses, Brenda Noiseux is flexing her own creative muscles and taking on the world. An artist, photographer, community builder and writer she uses her powers for the good of all kind.]