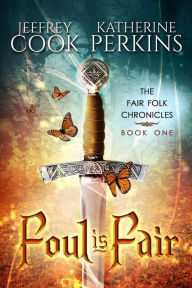 This is a great start to an urban fantasy series about a teenage girl who discovers she’s a fairy princess. The opening with the two girls really made me feel for poor Megan, whose creativity and ability to socialize was stolen from her by drugs — drugs that her mother makes her take. I also really felt for her best friend Lani, who can’t get her to pay attention to maintaining a friendship. The pills are clearly turning Megan obsessive-compulsive about numbers and schedules to the point where she can’t interact with people normally. Lani is determined to help her, with the aid of a talking crow.

Since the image of Megan’s creativity is the same image that’s used on the cover art, butterflies, I knew things would get better for her, and I looked forward to finding out how. Fairies show up while the girls are still living in our modern world. Then the action starts. There is danger, and there are kittens! What more could we ask for? Well, a trip to Faerie, of course, and that’s what we get. Megan journeys to the fairy realm on a quest to find the father she never knew.

I like the authors’ explanation of the seelie and unseelie courts that they are summer and winter, not good and evil. I like that they have an actual reason to exist and that both are necessary for nature to work correctly, and that they aren’t just a good side and an evil side that exist for no particular reason. Winter’s redcaps are as necessary as summer’s pixies, and the things that look like rotting corpses look like that because they represent death, not evil. There is a Summer Queen and a Winter King, which links the fairies with the Summer King and Winter King of pagan mythology. There is more at stake in the turning of the seasons than human lives or souls, and one side can never be permitted to win permanently. That is a very pagan way of looking at otherworldly entities and their relationship with nature.

There were some surprising touches in the book. All the prefigured events eventually happened, but the story seeds occasionally sprouted in unexpected ways. Towards the end, some of Megan’s decisions left me frustrated. I can’t explain why without giving away plot spoilers. The tropes set up in the beginning, particularly the otherworld journey, led me to expect fairy tale rather than just any old sort of fantasy. The main character does grow and change over the course of the book, but not enough changes in her life to assume that she will live happily ever after. There are three more books coming in this series, so by the end of the series maybe this fairy tale will reach a fairy tale ending.

This book kept me up late reading. I recommend it for readers of modern fairy tales and of YA urban fantasy.