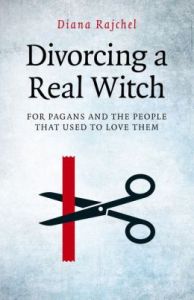 This issue, we sit down with eclectic Wiccan Diana Rajchel. Here, she discusses her new book, Divorcing a Real Witch; attitudes towards divorce and divorcees in the larger Pagan community; and her up-coming books on Mabon and Samhain.

Eternal Haunted Summer: If you correct one common misconception about Wicca, what would it be?

Diana Rajchel: These days, the greatest misconception I hear is that it’s the “default” religion for Paganism. That just isn’t true and it’s becoming less true as people mature and feel callings to different paths. Fortunately for me, most people were actually well past the Wicca = Satanism!!!! stuff when I came to the path circa 1996. The people that do that now are the sort that declare a piece of paper Satanic unless it’s a church-approved brand; not really the type where persuasion or sense works.

DR: I don’t anymore. I am initiated as a 3rd degree in the Shadowmoon tradition, and I have worked with other Wiccan paths. The truth is, I’ve been drifting away from Wicca as the more nit-picky identity politics popularized on Patheos and PaganSquare have made me feel unwelcome in my own faith. That and I am a pragmatist: I like magic. I like spells. I like doing the work and often I prefer to do the work rather than talk about who that makes me.

EHS: Congratulations on being nominated for the Diagram Prize. How did you settle on the title Divorcing a Real Witch? And did you consider other titles for the book?

DR: I knew this would be my first book, and I am well aware of my unknown status. As I wrote the book and tweeted about it, people in my own support network and those close to them who identify as liberal Christian, atheist, agnostic, and so on actually gave me the most encouragement. It became clear, with what I heard from those supporting me, that it needed at least a chance to cross over from the Pagan market, and to do that it needed to stand out. After much brainstorming — and invoking my inner smarta** — I came to Divorcing a Real Witch.  My original working title, Handparting, felt much too specific and exclusionary, especially as survey participants identified all over the Pagan religions map. Ultimately, I wanted it to talk about magical people and those that walk with magical people — in my mind, that can include people that don’t practice magic, but who believe in miraculous, outside-the-mainstream things, or who at least feel an affectionate tolerance for it.

EHS: Why did you write this book?

DR: Because I needed to. After my own divorce at 26, I confronted a lot of stigma both inside and outside the Pagan community. We are getting better about helping children (and learning some hard lessons there), but when it comes to younger adults, there’s a lot of ageism and dismissive behavior on the part of our elders. Since I did not have a good resource, I made one. I am really hoping it prompts people to make more resources relating to divorce, grief, and self-care. As I began to ask questions and investigate, I discovered a lot of Pagans still carry significant psychic burdens from their own divorce experiences. There were several situations where a person who spoke openly about his or her divorce in a semi-public forum would, upon being asked to participate in the survey or engage in an on-camera interview, turn bright red and decline. On top of that, divorce, sex, marriage, having children — the grit of those experiences — changes from generation to generation.  DARW offers a starting point. We have a lot farther to go, and we will need to update based on the needs of each generation.

EHS: How did you go about finding interviewees for the book? Did you put out a call, or contact specific people? Were you expecting two hundred respondents?

DR: I don’t know what I expected, but I’m delighted with what I got! I put out calls on Twitter and Facebook, I contacted individual friends who also experienced divorce, and I asked folks to share it with people they knew personally. I think there could have been a lot more people sharing their experiences, but there is a tendency to treat the unknown/non-famous with suspicion, and in a couple cases when I posted in forums, threads were either attacked (who are you/how dare you type stuff), or in two cases, hijacked with advocacy for same-sex marriage. (I am very much for same sex marriage/equal rights for all people. This, however, was not germaine to my threads, though I did hear from one person who divorced out of a same sex marriage.)

EHS: Did you find any of the responses particularly surprising or unexpected? Or was there a certain uniformity to the responses, born of a shared experience?

DR: I think there were a few common threads by section — women under 40 and men over 40 reported experiencing more stigma inside and outside the Pagan community. Most of the women, especially, participated in some type of ending ceremony, usually without the former partner, even though most participants altogether had never even heard of a handparting ceremony.

I did have an unexpected thread of men contacting me privately to ask about what was available to support men going through divorce; many male divorcees expressed a sense of marginalization that I struggled to address. There isn’t a lot of good-for-mental-health options out there for Pagan men experiencing divorce.

I also noticed that, even after I excluded people that identified as polyamorous, the vast majority of people entered new relationships before they completely finished their marriage — and often it wasn’t just because they had to wait for the papers. I tend to be a bit shy when it comes to dating, so this on a personal level took me aback, but I’m not sure what, if anything, that says about Pagans — I speculate that if I did a broader survey on divorced people, I might not find any differences in space of time between partners or stigma experienced.

EHS: The book includes a number of rituals and suggested outlines for rituals, including one for a “handparting.” What is the origin of the term handparting, and did you create these rites yourself?

DR: I did create these rituals entirely myself. Writing ritual is something I enjoy doing.

As to handparting itself, I first encountered the concept in A Wiccan Bardo by Paul Beyerl, and I have seen other references to it in other places (I don’t have a copy, but I think I saw it in an ABC of Witchcraft by Valiente as well.)

EHS: Where can readers find Divorcing a Real Witch?

DR: Amazon, all countries, Barnes and Noble, and you can ask your favorite local bookseller to order you a copy. Yes, it is available on your favorite e-reader as well.

EHS: The book was released by Moon Books. Why that publisher? Did they approach you, or did you send the manuscript to them?

DR: Moon Books sent out a general call for manuscripts and I sent it in response without any real expectation. They responded with a contract, and since I’d already been working on the book for ten years, it seemed a good way to make sure I finished it!

EHS: You have two more books coming out this year from Llewellyn, Mabon and Samhain. Firstly, why those two holy days?

DR: They are part of an eight book series of Sabbat essentials that Llewellyn is releasing. I consider the two holidays deeply interconnected — Mabon is facing death, Samhain facing grief, and this is how I broached it to the coordinating editor on the project. She went for it.

EHS: What sort of research went into Mabon and Samhain? Were there any tidbits that you discovered that you found particularly surprising or intriguing?

DR: Both actually required, if you’ll pardon the California phrase, hella research. I wound up digging through material on Google Books that dated back into the 19th century and I had quite the rollicking adventure with the Minneapolis library’s archives. For Mabon, I interviewed Aidan Kelly, the arguable “inventor” of the holiday. Samhain is always a fascinating holiday, not in small part because of how modern Halloween came to be the second largest retail holiday after Christmas — and because it is not nearly as American in its roots as people think, nor is Samhain necessarily quite so Pagan.

DR: At the moment, I am still wrapping up the final rounds of proofing and editing on Mabon and Samhain, and I am working on a book tentatively titled Urban Wicca that looks at cities through an updated understanding of urban design and carbon footprints. I am also exploring venues in San Francisco — I plan to teach an Artist’s Way class.

EHS: Which book fairs, conventions, or other events do you plan to attend in the foreseeable future?

DR: At this point, I have no set plans. I just moved to San Francisco from Minneapolis for my partner’s job, and this has cut into funds I might otherwise use to attend these events. The Diagram prize has reopened an opportunity for me to present at local metaphysical shops, so I may do that, but so far I haven’t had much time because of the relentless business of getting settled in here.

If that does change, I can be found at my blog, at Divorcing a Real Witch, and on Twitter.