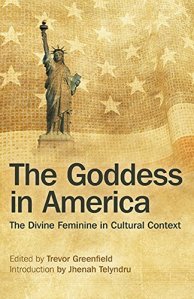 The Goddess in America is a collection about the revival of the Goddess and its ties to women’s spirituality. The book it divided in four sections: the native Goddess, the migrant Goddess, the relational Goddess, and the contemporary form of Goddess. It is quite short, about one hundred and fifty pages, but very interesting and it presents a lot of information as well as Goddesses of different origins. All the collaborators brought a new perspective and there is none of the overlap that sometimes makes these kind of book redundant and hard to read.

What surprised me upon reading this book is the influence matriarchal American Indian tribes had and still have on the feminism movement and on women’s spirituality. Those tribes’ contributions have been nearly erased by the dominant culture, yet without them American democracy and the feminist movement might have been entirely different from what we see today. That is the object of part one and it gave me a new appreciation of the native cultures of this continent. As pagans, we should be aware of the influences that shape our path and that those influences do not come only from Europe.

I appreciated the second segment the most: the Migrant Goddess. It touches on the challenges that living in America may bring, such as honoring the earth where we live without appropriating the way of a culture still under treat. If we add to that following Goddesses rooted in far away landscapes it might become difficult to practice with any authenticity.

This difficulty is touched on brilliantly by Laura Perry in “Importing the Goddess: Ariadne in America.” Her account is personal and gives a good example of a way to reconcile following a European earth spirituality while not living in the landscape where this spirituality emerged. Her essay shows us a possible way to honour the land where we live and respect both Goddess and the native culture of America.

I highly recommend this book. To me it is the modern equivalent of Margot Adler’s Drawing Down the Moon. With The Goddess in America, one can learn where women’s spirituality comes from, why Goddess is important, and how the spirituality can move forward with respect for native cultures of America and still be relevant for those who do not live in Europe yet feel call to work with European divinities.