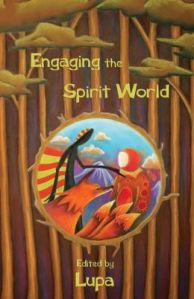 This is not precisely a new book, having first been published in 2013, but it is an important one. Six years in the making, its essays are split unevenly between the three best-known paths dealing with the spirit world: shamanism, totemism, and animism in general. The essays come from a wide range of authors, some well-known in the pagan community, some less so. Of the eighteen essays, six are on shamanism, four on totemism, and the remaining eight on other forms of animism (and animism in general).

Within the section on shamanism, readers are treated to essays such as Raven Kaldera’s, which discusses the difficulties that the path leading to becoming a shaman imposes, and the changes it makes in one’s life, especially in the modern era; S. Kelley Harrell’s essay on the problems created by Michael Harner’s The Way of the Shaman and its core shamanism pathway by divorcing various indigenous shamanistic forms from the cultural and ethnic contexts in which they were originally born; and Lupa’s discussion of creating a modern neoshamanic pathway born from the culture of the mainstream peoples of the modern first-world United States (with a shorter discussion of cultural appropriation on the side). Each of these essays (as well as the ones I haven’t mentioned) touch on important and intriguing topics that share a great deal of experiential information on the greater subject at hand.

The second part of the book deals with totemism and the totem spirits that its practitioners work with. From Veronica Cummer’s essay “Kin to the Lightning” to Kali Black’s essay “Feral Magick: Anarchashamanic Urban Totemism”, numerous more subtle concepts than the simple question “What is your totem?” are discussed in this section. Learning how to craft shrines for totem spirits, feral and urban animals as totems, and the totem spirits inherent in your own body are all among the topics discussed here.

The final section of the book is devoted to “Other Animisms”, a mixed bag of essays covering many different aspects of animism. The essay that opens the section, Erynn Rowan Laurie’s “A Word Among Letters: Animist Practice in Celtic Reconstructionist Paganism”, is an excellent example, discussing animism in a very specific cultural context. Bari Mandelbaum’s essay on one’s animistic relationship with one’s own body, Paleo’s essay on connecting to the totems of the animals and plants whose flesh we eat, and Dawn M. Allenbach’s essay on science and animism all look at particular facets of the overall topic of animism.

The organization of this book makes it easy to track down specific essays one might find most appropriate to your own practice or path. Nonetheless, I recommend reading the entire book, as the entirety of the collection serves to add both depth and broadness to the reader’s understanding of the overall topic. I read a number of the essays thinking they might not be of particular interest to me, and was delighted to find I was wrong in every case. There are several essays I will end up going back and re-reading on a semi-regular basis, digesting the ideas and breaking them down on multiple levels as they spur contemplation of connected ideas of my own.

Like the editor’s other essay collection, Talking About the Elephant: An Anthology of Neopagan Perspectives on Cultural Appropriation, this collection is a treasure chest full of fascinating gems, each one worthy of long study and fervent appreciation of its sparkle. Given the number of lackluster books on animism on the market, this collection stands out head and shoulders over many others, and I recommend it without hesitation.