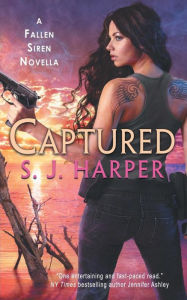 Emma Monroe is a siren — cursed by Demeter for failing to protect Kore from Hades, she wanders the world seeking redemption. After thousands of years, she has gotten very good at both hiding her nature and at finding lost and kidnapped children. Now, she works with the FBI as part of the Child Abduction Rapid Deployment unit. After two children are murdered in Charleston and a third disappears, Emma teams up with Special Agent Zack Armstrong — a very in-the-closet werewolf. Emma and Zack are immediately attracted to one another, but they are professionals: the case comes first. The problem is, they both have secrets which they are keeping from one another, skills which could prove vital to saving a a child in mortal peril. How much do they risk revealing to one another?

I’ve had my eye on this series for a while, so, when I discovered that the prequel novella was available for free through All Romance eBooks, I immediately downloaded it. All I can say is — awesome! This is a fun story.

The characters are terrific. Emma is sympathetic and complex; one can’t help but feel that she is being unjustly punished — but she never whines or complains. She understands how grief can drive anyone, even a Goddess, to extremes of anger. Instead, she focuses on doing as much good as she can, saving as many innocents as possible, in hopes of redeeming herself in Demeter’s eyes and being restored to Olympus.

Then there is Zack: yes, totally hot, but also deeply committed to his job. He is very good at handling traumatized parents, and, while he hopes for the best, he is not blind to the possibility that the missing child may already be dead.

Captured is told entirely from Emma’s point of view. As such, the reader is left in the dark as to Zack’s backstory until the next full novel, Cursed. And since Emma and Zack are keeping their true natures from one another, they use their powers on the sly, out of sight of one another and any curious, ignorant mortals. This results in some very dramatic, tense scenes as they struggle to identify the murderer and rescue the missing child, coercing witnesses through supernatural means and chasing down leads they should not realistically have.

I loved Captured. My only complaints regard the formatting, and the odd grammatical error. More than once, a scene jumped mid-page, but there were no dashes or asterisks to indicate as such; it was very disorienting. Additionally, completely incorrect terms were used in a few places, e.g., “gambit” instead of “gamut.”

Those complaints aside, I highly recommend Captured. It’s a fast, fun read filled with interesting characters, a bit of humor, a touch of romance, and some tense action sequences. I also recommend that it be read before Cursed; while the novel can be read first, all of the background provided by Captured makes it much more enjoyable.

[Rebecca Buchanan is the editor of EHS.]