Sit down, sit down; you will want to be in touch with the earth your mother for this story.

This is the story of how Loki thought he could take the good earth’s bounty without giving in turn, and his foolishness meant he had to repay with even greater gifts, at great cost to himself.

Sif was the wife of Thor, and as he was the son of the earth, there was no better wife for him than the goddess who in her own self exemplified the earth’s bounty; this was shown forth through her rich, golden hair, which was as thick as the wheat field is in a year of good harvest, and was a promise that the earth would always yield such bounty.

Now Loki was always more than half a troublemaker, and although he lived with the great gods who tried to make order in the world, he consorted with the ice giants who were the forces of chaos, and he was ever trying to get a little bit of advantage from whomever he could. He admired Sif’s hair, as did all who saw it, and in his admiration, he thought he could get something for nothing. So he waited until Sif slept, and he crept up to her and cut all her hair off.

When Sif awoke she was horrified, and she called to Thor, her husband, saying, “My hair has all been cut off! There is only one who can have done it, that troublemaker among gods: Loki.” Thor went and found Loki where he had hidden himself, and bore him before the council of the gods. Thor threatened to break every bone in Loki’s body, and the gods were of a mind to agree with him, especially Freyr and Odin. Freyr loved to travel the world and to make sure that humankind had enough of the earth’s bounty to enjoy, and he was saddened to see the goddess of the earth’s bounty treated so badly. Odin the Allfather was angered because Loki was causing chaos, as always, and Odin was always fighting to bring order to the world. So Freyr and Odin told Loki that he had to make reparation to everyone.

Loki went to the Black Elves, also called the Dwarves, and to the smiths among them called Ivaldi’s Sons, who worked under the mastery of the great smith Dvalin. These dwarves lived within the earth, and Loki knew that given enough time, the earth will heal the earth, so he hoped to find within it gifts good enough to turn aside the wrath of the gods for taking the earth’s bounty so thoughtlessly. He asked the smiths to make for him a replacement for Sif’s hair, made out of gold, found within the earth, which would become part of her flesh and grow like her original hair, and be even more precious than what he had taken. And he asked of them gifts for Freyr and Odin also.

Then even Loki was impressed with the gifts the dwarves had made, and in his foolishness thought he could still get something for nothing. So he wagered with the dwarves Brokkr and Sindri that they could not make three other precious things equal to these already made, and he swore that if they did, they should have his head.

So Brokkr and Sindri heated their forge, and into it they put a pigskin. And in the heat the pigskin began to glow, becoming precious gold. Loki saw that they were making something precious indeed, and he took the form of a fly, and he bit at the dwarves and harried them as they forged, but in spite of him they forged the pigskin into a boar with golden bristles.

Then they heated the forge again, and put into it gold. Loki thought there was no danger, because who can make gold more precious than it already is? But then they began to forge it into a ring, and Loki saw the risk, for a ring is a thing that people give to each other and use, and thus it is more precious than raw gold. So he bit the smiths harder than he had before, but they finished the ring anyway.

Then they heated the forge again, and put into it iron. Now Loki watched them carefully, and he saw them beginning to forge something very powerful, something beyond any weapon that had been forged before. He bit them so hard that blood ran down, and they stopped and swatted at him, but the iron was forged into a hammer all the same.

Then Loki took the gifts of the sons of Ivaldi and Brokkr and Sindri took the works of their hands, and they went before the council of the gods, in which Freyr and Odin and Thor would give judgment about which gifts were the most precious, to determine the outcome of Loki’s foolishness.

Then Loki extolled the gifts he had brought, giving to Freyr the boat Skidbladnir, in which he could travel the seas. This boat was the best of all boats, for it was large enough for all the gods, and whenever the sail was raised it would find a fair wind and go where the gods wanted, and when he did not need it, Freyr could fold it up like a napkin and store it in his pouch.

And Loki gave to Odin the spear Gungnir, with which he could ride to the hunt and to battle. This spear was the best of all spears, for it was carved with runes, and in it was such power that it was perfectly balanced, and it would strike any target at which it was cast.

Finally Loki gave to Sif the cap of golden hair. And behold, it did as the dwarves said, and it became one with her flesh, and it grew as her hair should, until her hair was as long as she was tall, and shone with the beauty of the earth’s bounty again.

Then Brokkr and Sindri extolled the gifts they had brought. First they gave to Freyr the golden boar, called Gullinbursti, saying that he would run through air or over land, and would run better than any horse, and he would run at any time of the day or night because the light that shone from his bristles would light his way.

Then they gave to Odin the golden ring Draupnir, saying that every ninth night, eight rings of equal weight would drop from it, and thus give Odin riches without end, so that he could give rings of gold to his folk and his fighters, as a king should in order to be a good ruler. 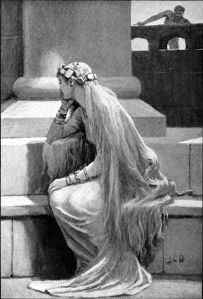 Then they gave to Thor the iron hammer Mjollnir, saying that it was small enough for him to keep in his tunic, but large enough for him to strike however hard he wanted, and that if he threw it, it would always return to his hand. Now the hammer Mjollnir had one flaw, that its fore haft was a little short, because Loki had distracted the dwarves with his biting, but it was still a truly magical weapon.

Then Freyr and Odin and Thor took counsel together, and they judged that Loki had made reparation with his gifts for the harm done to Sif and the disrespect he showed the earth’s bounty. But they also judged that the gifts of Brokkr and Sindri were more marvelous, and that the hammer Mjollnir was the most marvelous of all the gifts, because it was the most powerful tool for fighting off the forces of the ice giants and the chaos they brought.

So Loki’s head was forfeit to the dwarf Brokkr. But when Brokkr would have cut his head from his body, Loki objected, saying that Brokkr had a claim to his head, but no claim to damage his neck. Instead Brokkr took an awl and a thong and sewed Loki’s lips together, in hopes that the troublemaker god’s foolish words would not sway anyone else to follow in his path.

Now this story shows that all things, even the tools and the weapons of the gods, are made from the bounty of the earth, what she grows and what she contains. It shows too that the laws of reciprocity are binding in every kind of exchange: just as there is gift giving among the gods, and the laws of hospitality among humans, it is also the truth that none may take from the earth’s bounty without repaying it, even at great cost to themselves.

So I ask of you this question: In this season as we harvest the bounty of the earth, what do you give in turn? Now, all of us will give her our bones, just as our ancestors gave theirs to the earth and sky and sea, but what do we give before that? Is it only what we discard out of hand, trusting her to take it into her depths and transform it into something useful to us again? Or do we give her more – our time, our attention, our love and joy?

The Moral of Our Tale: If you try to get something for nothing, especially by stealing from the earth, you will have to pay a greater price in the end. If you give to her, she will give to you, and on and on, gifts multiplying gifts and becoming ever greater.

[Literata Hurley is a Wiccan priestess and writer. Her work has appeared in several anthologies, including Mandragora, Unto Herself, and Anointed as well as multiple periodicals. She is currently completing her doctoral dissertation on the history of magic with the support of her husband and four cats. www.worksofliterata.org]