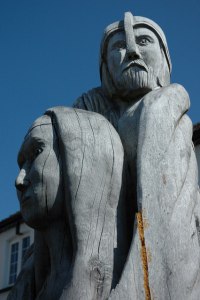 The king crouched upon the dusty floor, dreaming and not dreaming. Waiting, most of all. He’d never been good at waiting. Always, before a battle, his blood sang with impatience, his hand itching to grip his sword. This was no different, though his sword would be of little help here. He flexed his fingers, helpless, waiting. He’d ridden all night to be with her, and here he sat, useless.

“I’m sorry, Your Majesty, but I can’t let you through,” the guard had said, his cheeks flushing with embarrassment.

“I want to see her,” Arthur insisted.

“I’ll wait.” He dismissed the guard. She didn’t want to see the king. She would have wanted to see her champion, now errant, misplaced.

A whisper of velvet along the stone floors tugged him out of memory. He lifted his gaze as his sister descended the narrow stone stair, the small bundle swaddled in her arms. His heart rattled in his breast like a stone. Already it was over. She’d not called for him. Not once.

Morgan’s blue eyes met Arthur’s. She nodded briefly, her face pale with fatigue, her mouth set in a thin line. He creaked to his feet to greet her, stepping into the shadows where she paused. They’d hardly spoken over the last several months. There had been so little to say, and so much. His throat closed around a word. “I wanted to be there,” he choked.

She smiled sadly. “I didn’t realize you were still here, my king. I must be going now. It’s best I leave before anyone really knows.”

Arthur swallowed thickly, nodding. “I can ride with you. If we leave now –”

“No,” she answered, her voice firm. “I must go alone. The priestesses will receive me. I’ve sent word ahead.” She touched his arm gently. “It’s better this way. Our secret, remember?”

The infant gave a squall of discomfort. She shifted the child and spoke softly to calm him, her words low and melodious, like snowfall in a winter wood. Arthur’s eyes never left her face. “He will take you from court. What will I do without you?”

“What you must,” she said. “There is Merlin. And if you need me, if you truly need me, I will come.”

His brow furrowed. “How is she?”

“Resting,” answered Morgan. “I’ve given her a sleeping draught and a bit of medicine for the pain. It’s the only thing that quelled the screaming. She’s very upset, Arthur. She didn’t want this at all. Are you sure–?”

“Yes,” he answered tightly. “She knows the terms. She made her choice.”

Morgan’s eyes held his. “And you? What is your choice? What will you do with her, your queen?”

He shrugged. “I . . . I suppose I’ll take her home. The people miss her.” He missed her, despite everything.

“And you think she’ll go with you? She hasn’t seen you in months. And the queen’s champion, he’s been here, or so I’m told.”

Arthur loosed a ragged breath. She’d left word for him. “I want her home,” he said, with finality. “It’s time.”

Morgan’s eyes drifted to the child. He had quieted, slept soundly in her arms. “I hope so, Brother. Send for me, if you need me. I must go before night falls.” She pulled her hood over her dark hair, her black skirts dragging through the dust as she swept toward the door.

Her lips quirked. “Gwen named him after her brother. The one who died.”

“I’ll raise him as my own, my king. No one will know. You needn’t worry anymore.”

She left the king behind and strode out to the twilight forest. She mounted her steed and rode through the mist. Arthur leaned against the door frame, straining to pick her out of the distance.

His eyes slipped shut. “It’s over.” He closed the door and turned toward the stair, mounting the steps two at a time.

[Sabrina N. Balmick was brought up on a steady diet of fairy tales and folklore. When she isn’t dreaming up new fantasy worlds, she leads content strategy and marketing for a national recruitment firm. She lives in South Florida.]