A five-track EP from a quirky singer. Just out this November, it was produced to coincide with the DarkFest in Portsmouth, England. Eilís has studied History in the past and is working on her PhD in – wait for it – Monster Theory. A Folklore-oriented study that also covers Supernatural Geographies.

Naturally, a lot of her research creeps into her song-writing, because that’s just the kind of person she is. It has a beautifully photographed cover, with a spectral-sci-fi look to it. I use the word sci-fi deliberately because it has a 1960s psychedelic vibe going on. So much for the packaging.

The first song is entitled “Boneshaker,” but when I first heard it in my car, the stand-out line for me was ‘barefoot woman’. Eilís drops in these little nuggets, knowing that they carry a resonance. It’s essentially a song about a man’s expectations of a woman, and her resistance to his well-worn overtures. Another line refers to nurseries, which makes her think of galaxies, revealing that she could not be content being barefoot and pregnant in the kitchen.

The second track, “Moon Hearted Bird,” refers to the whippoorwill, or nightjar, a soulful calling to her own night-side. Gothic and ethereal with dream imagery, masks and candles dripping their wax, horsemen on the periphery of a game. Spectral and special. Flavoursome chills.

Third, “Malcolm,” is addressed to an “imaginary astronaut” who would understand why “I don’t want babies”. “I once dreamed I’d be an astronaut,” she sings, and enters the liminality of wishful thinking and unfulfilled yearning. Her “illusions” are “stoic”.

Fourth, “Bellerophon,” references many figures in Greek and Roman mythology, a favourite of hers from previous albums. All things wry and edgy engage her imagination and tune her voice to the other-ness of the unheimlich. Chrysaor gets a name-check – the twin human brother of Pegasus. I read something recently that, if you don’t have a word for it, the thought remains inexpressible. Eilís with her dangling images nudges us towards the inexplicable.

I’ve concentrated on the lyrics, but the production is an excellent setting for the gems of her songs. Kudos to all involved. Eilís’ evanescent vocals are matched by the otherworldly soundscape of drums, BVs, and bass.

I would recommend that you go to her link. Her WordPress link also contains: essays on her condition of synaesthesia; short pieces of fiction; and links to her previous albums. All seriously worth checking out. 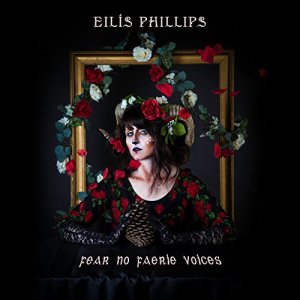 P.S.: Fear No Faerie Voices is another EP produced by Eilís Phillips. It was launched at Darkfest in November 2017 in Portsmouth, England.

The first track, “Fear No Faerie Voices,” has a confidential, whispering quality as if you have encountered your own private ancient mariner. Nightscapes, night-noises, and a fear for your soul — it’s all there, but of course, you don’t have to fear them. Keep on whistling by that graveyard.

Second, “Asterion (Ruler of stars)” is a song about Ariadne’s brother, better known as the Minotaur within the Labyrinth. Theseus was not the only one who needed a red linen thread to find his way through the Cretan Maze. Shadows consume the things that cast them.

Third, “The Strangers” is a fairy-tale quest. I’m not sure if Eilís is familiar with the self-penned songs of Dory Previn, but this has a Previnesque quality, with a narrative that is bitter-sweet and resigned, dealing with the what-ifs of longing and regret.

Fourth, “There I go.” Immediately we are in the liminal world of froth, between land and sea. A landscape of fairy-tale motifs, with wolves and dragons, evils and story.

Fifth, “Bitter for Ulysses.” Advice for Ulysses to cover his ears so that the Sirens shall not lure him into the sea to be drowned. But then the Sea “ties up all loose ends”.