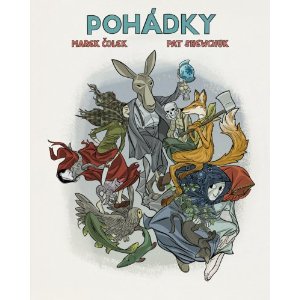 Turning the pages of Pohadky, I feel like I’ve gone hiking through a dream lodged somewhere deep in the mountains of Eastern Europe, and stumbled haplessly into a fairy ring at midnight. It’s always night here and it’s always otherwhen, in a realm swirling with knowing young witches and cautious babushka-wearing crones, entranced male revelers, satyrs whose eyes hold ancient tragedies and soberly mistrustful axe-wielding bears, a place where suddenly a young peasant woman’s skirt could twitch mid-dance to reveal a wolf’s tail, or, if you listen closely enough, you’ll catch the clop of hooves within her sprightly bouncing shoes. Maybe she’s a feral being of the woods and rivers, a rusalka temporarily wearing a human skin, and that smile conceals a robust kitchen knife held behind her back, poised to retrieve a moist, tasty human liver to share with her shaggy leshi husband the second that you turn away. Perhaps the liver she seeks needs to be suitably pickled in vodka and sorrows first, owned by an Iron Curtain era soldier, or willingly shed by some lost soul trapped within their life. Maybe she’s just going on a midnight raid for a basket full of mushrooms or apples — nothing sinister here, sweetie, just pass me that magic tree branch. Or maybe she’s not the real wolf — it’s the specter of a lost way of life buried under grinding poverty, emptied liquor bottles, barely checked violence and rumpled communist uniforms that growl from Marek Colek’s drawings. Maybe that’s exactly why the older women in these drawings look so guarded, and what that young peasant witch cheerfully holds her knife against.

Crosses will not save you here (neither will the calculated disbelief of proletariat stars) and you might not have to make a deal with that sad old goatfoot, after all — he may just turn out to be a not-quite forgotten forest God far older than Christianity or political dogma, set to carry you away on his back or transform into a tree when you look at him a little sideways.

Pohadky is neither a traditional artbook, nor a graphic novel with a coherent story, despite being issued by underground comics publisher Drawn and Quarterly; instead, it’s an atmospheric gathering of narrative art akin to entering a wing in a museum gallery, a series of visual vignettes circling the theme of Slavic folklore and barely smothered myth, sketched in black lines that evoke regional wood carvings or embroidery with muted computer colors that seem drawn from some murky mountain forest just before dawn. No artist’s statements, biographies or editorial explanations are provided, leaving nothing to distract from the art, and a riddle for the audience to decipher if they care to match the page numbers, multiple full-page closeup details, titles and pictures.

Like any fine piece of creativity, it’s well worth the work to “get” it. Reading this book will thrust most observers in mid-story, with a skeleton of context on the back cover; as a tourist in Pat Shewchuck and Marek Colek’s imaginary landscape, you observe the images, catching glimpses of repeating motifs and decorative patterns that re-appear within characters’ clothing and let the moody color scheme of Colek’s art and the stark simplicity of Shewchuck’s symbols speak for themselves. Have a mischievously pre-Christian streak, or some background sketches of Eastern European culture and history in your mental suitcase to bring along?  All the better. If you don’t, Pohadky is still an interesting ride. Intuitively, the sum is more than the parts, but how that sum connects isn’t a neat narrative to be translated into words. It requires patience and an intuitive sense to unlock, rather than a heavy-handed academic symbolic analysis; first impressions or scholarly theories will not tell the whole story.

An intricate dance of black humor, longing, grief and mischief is woven into narrative drawings steeped in Czechoslavakian culture with titles such as “Nature Triumphs over Monotheism” and “Graveyard of Utopia.” A primal power  resonates in Pat Shewchuck’s abstract images like “Berehynia, The Protectress” and “Forest Divinity Symbol”, drawn from pre-Christian Ukrainian folk art, which pop from the pages in singular glory like a set of Eastern European runes. It’s not immediately obvious how these two seemingly separate forms of art intimately relate, but careful observation unlocks a repetition of stand-alone symbols within many of the narrative pieces, and a focus on the forces of nature throughout the book.

Pohadky means “folk tales” or “storybook”, and the images within evoke something far, far closer to the mystery, danger and mythic understanding inherent in the original European tales than the Victorianized notion of quaint little children’s book stories rampant in the Western Hemisphere. The only direct reference to a storybook figure in the whole lot I could recognize was an image entitled Krasna Vasilisa, and even that isn’t straightforward. In this drawing the usually youthful Slavic heroine Vasilisa (the Beautiful) is a faceless and overburdened figure in a head scarf and peasant clothes who cuddles a sleeping bear into the back of her knees as she holds up the magic skull given to her by the crone Baba Yaga as a lamp through the forest, lighting her way back home to an abusive stepmother who sent her to Baba Yaga on an errand hoping she’d be killed and eaten by the witch. The ghoulish, gifted lamp’s sockets glare down like a spotlight on one man’s sorrow.

Ultimately, the artwork in this book enters thematic territory that’s both familiar and alien to me — it’s as if someone swapped the leaves and filling of my mother’s homey stuffed cabbage rolls with something wilder, smokier — feral game and primal forest plants, with just a sliver of dizzying toadstool mixed in. Visually, there’s a dash of Mike Mignola’s Hellboy comics to the style, a bit of Japanese woodblock prints mixed with alternative comics, and other traces I can’t identify, pressed between bewitching geometric patterns I’d expect carved into the rafters of an ancient house or painstakingly rendered in red cross-stitch on a traditional table linen. I recognize the peasant scarves, the swirling patterns and farm imagery that drift out like smoke and perfume from under the locked doors of handmedown stories of my dead relatives’ childhoods in Europe. I’m intrigued by a musky pre-Christian sensibility that permeates these drawings — gnarled goat-horned men and confident young women abound — but also a bit unnerved by the sense that I’m observing inseparable and violent motifs drawn from a post-Christian mixed bag of fear and attraction to both wild places and sex personified as dangerous and inscrutable “witches” while the men seem overwhelmingly broken and tragic. All the axes, shiny knives and sad, toppled male skeletons seem to confirm that it’s the women in Pohadky who actually hold all the power, wielding it in mesmerizing ways. I’m not a full participant in this cultural conversation, so I may, in fact, be totally wrong — I’ve just caught a few familiar motifs in the pieces brought forward by Colek, and it’s an experience that’s going to stay lodged within my consciousness despite a bit of ambivalence, while Shewchuck’s abstract images make me want to dig further for ancient meanings.

[Shirl Sazynski tells stories in a variety of media from scriptwriting, comic book pages and illustration to fiction, poetry, essays and journalism about the arts. Cited in The Year’s Best Fantasy and Horror in 2008, her writing has recently appeared in the computer game VIE: Virtual Island of Entertainment as well as books, magazines, newspapers and other publications. More of her work can be found at shirlsazynski.com.]