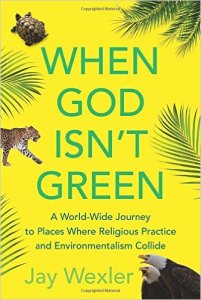 When God Isn’t Green: A World-Wide Journey to Places Where Religious Practice and Environmentalism Collide is surprisingly easy to read. Jay Wexler is a professor at Boston University School of Law, but this is not an academic text. Part breezy travelogue, part serious examination of the issues, this book contains many moments of absurdist humor. An early review copy was provided to me through LibraryThing. I recommend this book for anyone interested in environmental issues, especially religious leaders.

In the introduction, Wexler related how he got the idea to write about instances in which religious practices may conflict with environmental law while touring the US government’s Eagle Repository, which controls the supply of eagle parts and feathers allowed to Native American tribes. Each of the practices examined in this book is an example of two values conflicting: religious freedom and protecting the environment. Solutions for the problems outlined in the book could involve law, technology, education, or market forces.

This book is chock-full of details about little-known religious practices. For example, the Jewish faith requires that waste containing the written name of G-d, called shaimos, must be disposed of separately from regular garbage. In the days before the printing press, there was not much shaimos. These days, there are many worn-out books and copies or printed-out pages that qualify as shaimos. Like proper disposal of shaimos, there are many religious practices that were not a problem for the environment when they began, but industrial production turned them into a problem. For example, during the Hindu festival Holi, participants throw colored powders and colored water at each other. Traditionally, these colors were made of flowers, leaves, spices such as turmeric, and other nontoxic, biodegradable substances. Today, some of the colors are commercial chemical dyes, which can be dangerous in large quantities. The obvious solution would be to return to the traditional practice. Various organizations are already advocating for the return to natural colors. Some of the problems discussed in the book have been solved already, and many have solutions in various stages of implementation.

Wexler describes his travels as well as what he learned on his travels. This book is packed with descriptions of landscapes, rituals, conversations, artworks, and even a rare parrot. In each chapter, the author examines a particular issue, such as harvesting palm leaves for Palm Sunday. The history and culture of the place inform his narrative as he examines the environmental impact and efforts at mitigation, but Wexler never lets his writing get dry. He sprinkles his book with anecdotes, quotes, foods, and his journeys to the places he visited, so reading the book feels like being there.

In the chapter on the Ganesh immersion holiday in India, I was struck by his description of this holiday as “more of a festive celebration than any kind of solemn worship.” The word festive comes from festival, a type of religious holiday, so it seems odd to me that someone would see festivity as separate from worship. The author is an atheist, and although he respects religious rights, and enjoys studying legal issues around religion, and he obviously had a lot of fun doing ecotourism around religious issues to write this book, it’s also clear that he doesn’t fully understand what he’s seeing when he looks at an idol of Ganesh. Still, this book delivers on what it promises: a detail-rich travelogue examining environmental issues.

Wexler does not directly address any issues in the communities that identify themselves as Pagan or Heathen. However, pagans and pagan organizations might find some of the things Wexler discusses relevant to their own practices, for example, the use of incense, animal parts, and the environmentally conscious sourcing and disposal of ritual items. As pagans and heathens are generally interested in environmental issues, this book will be of interest even for those who are not looking for ways to green their own practices, but it will be doubly interesting for those who are. It’s a great read in an engaging style. I recommend this book for the general reader interested in environmental issues. I highly recommend it for the leaders of religious communities and organizations.