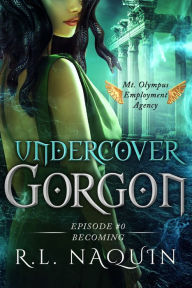 Patrice is your average almost-twenty year-old. She lives at home with her parents, works an awful job at a convenience store, and is taking college courses in herpetology. That, possibly, is the only odd thing about Patrice: she loves loves loves snakes and reptiles and amphibians. So, when midnight strikes on her twentieth birthday and her Deity Springs Stealth Insurance expires and her true nature is revealed, snaky hair and all, Patrice is thrilled. And off she goes to Mount Olympus to learn what it means to be a gorgon ….

I am perpetually on the hunt for new authors to read, and RL Naquin has been on my radar for a while. So, when I discovered that she had a free ebook available — and it was about Greek mythology — I snatched it right up.

This story was fun. Just that. Fun. A quick delicious morsel of literary escapism. I read it on my lunch break, and then went back to work, happy to have spent time with Patrice. She is an engaging protagonist: smart and snarky, but not mean, and — even better — not into bemoaning her heritage like so many other heroines. Patrice embraces her gorgon nature, and uses it to help herself and less fortunate around her … most notably a peaceful basilisk which was about to be exterminated.

Note: do not threaten snakes or snake-like mythological creatures in the presence of a snaky-headed gorgon.

So, do yourself a favor and go download Undercover Gorgon. And then check out the rest of Naquin’s bibliography. Recommended to fans of Annie Bellet, Jenn Stark, Dennis Staginnus, Kate Baray, and Shannon L Mayer.

[Rebecca Buchanan is the editor of EHS.]