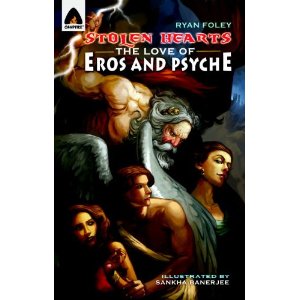 Title: Stolen Hearts:  The Love of Eros and Psyche

This is a short graphic novel of the familiar tale of Cupid and Psyche, which was first given literate form by Apuleius as a short digression in his second-century CE novel Metamorphoses, better known as The Golden Ass.  The adaptation is a very faithful one, with almost every detail of the original tale reflected accurately in this version.  It is here contained within a frame-story in which an older Greek woman tutoring a younger one, the latter of whom has just fallen in love for the first time, gives the younger woman advice in her future approach to love by way of the main narrative.

The illustration work in this graphic novel is by Sankha Banerjee, and it is both lavish and quite beautifully rendered.  At the moment, Campfire Graphic Novels only has five titles out in their Mythology series, of which this is one; another deals with Hercules, while the other three detail characters in the Ramayana and the Mahabharata.  I would be very interested in seeing these other titles, and I hope that they produce many more in the future, both on Indian as well as Greek, Roman, and other cultural themes.

The Apuleian prose version of the tale is rather short, and somewhat prone to being misunderstood, or over-interpreted as an allegory.  I personally found this graphic adaptation of it not only faithful in its presentation of all the salient points of the original tale, but much more easy to follow, and a far more enjoyable reading experience.  The writing in this graphic novel sticks to narrative detail, not to interpretations (which is all-too-tempting in so many modern retellings!) or to psychological readings of myth.  The beautiful artwork enhances the story greatly, while still leaving room for one’s own imagination to fill in a great many aspects between the illustrated frames.

I would highly recommend this graphic novel to anyone interested.  Further, it would be something that would be appropriate reading for many age levels, from as young as eight-to-ten-year-olds through all ages for teenagers and adults.  Campfire Graphic Novels is primarily aimed at a younger audience, in order to get them interested in mythology and other classic (in the broadest sense) literary works, but I think these very accurate renderings of stories would be as equally appealing to many adults as well, both comic enthusiasts as well as more general readers.

I cannot say enough good about this title, and urge anyone who might be interested to purchase a copy.

[Phillip A. Bernhardt-House teaches adjunct history and religion classes at various colleges in Washington state, and formerly taught as a guest professor at the University of Michigan-Ann Arbor. Phillip’s academic publications include articles in Béascna, Foilsiú, Cosmos: The Yearbook of the Traditional Cosmology Society, Journal for the Academic Study of Magic, Celtic Studies Association of North America Yearbook, and Studia Celtica Fennica as well as several anthologies and conference proceedings volumes, and articles inParabola and Thorn. He is also the author of Werewolves, Magical Hounds, and Dog-headed Men in Celtic Literature: A Typological Study of Shape-Shifting, published in 2010 by The Edwin Mellen Press.]