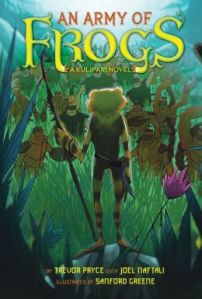 I got this book because it looked like a fun one to read to my six year old and because we are both Bronco Fans.  For those that are not football fans, you may not realize it, but Trevor Pryce is a former Denver Bronco player.

The book is about a group of frogs that live in a magically protected area in Australia.  This protection was put in place by the Turtle King after the last war with war-mongering scorpions.  During this war, many of the elite troops, called the Kulipari, were either killed or used up all of the poison which made them strong.  The book follows a particular frog who wishes to become one of the Kulipari, but cannot because he doesn’t have any poison.  He continually trains himself in the arts of fighting, hoping to join the Kulipari despite his lack.  Then, one day, he finds his training actually being put to use when the scorpions team up with the spiders in order to invade the Ampibilands.

I asked my son to help me review this book. Below is his synopsis with only minor editing for clarity and removal of spoilers.

This was a cute book and very entertaining.  This book demonstrates characters staying true to themselves despite the odds.  It demonstrates loyalty and how cleverness is more important than size, with just enough action to keep my child enchanted and entertained.  However, I do think the ending was rushed.  It very much felt like someone decided the book was getting too long so everything needed to be tied up and incentive given to purchase the next one.  I think this could have been done in a better fashion.  Despite this, we will be looking for the next book in order to continue with the adventures of Darryl and Gee.

[Melia Suez is a stay at home mom, a Hellenic polytheist, and the editor ofFrom Cave to Sky: A Devotional Anthology in Honor of Zeus.]