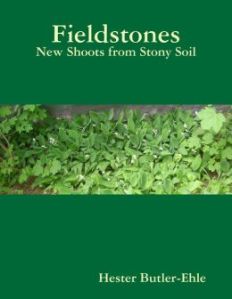 Hearthstone (a.k.a. Hester Butler-Ehle) writes a blog that has the same title as this book, and she has also written a book called Hearth and Field:  A Heathen Prayer Book (2012); both books are also available on Kindle.  The title of the work comes from the piles of stones in the middle of agricultural fields that end up being piled up over time, which in the author’s words “represent those pieces of the world that keep on resurfacing, no matter what we do to move them to somewhere more convenient for us” (p. 9).  It is a fascinating and intriguing image, and likewise the book itself is a wonderful collection of devotional invocations to a very large number of Celtic (specifically Gaulish, British, Welsh, and Irish) deities.

If one is a reader of Hearthstone’s blog and knows this, the book is inherently appealing; but, if one only saw the title in browsing the offerings on Amazon, one might not know what its subject is based on the title or subtitle.  While I greatly respect the author’s choice of title and subtitle in this case, it is unfortunate that a wider audience might not get access to these poems simply by happening upon the book in a general subject search.  With any luck, the present review might change that for the better!

The book is in three sections:  the first is “Gods of Ireland”; the second (and shortest) is “Gods of Wales”; and the third (and longest) is “Gods of Gaul & Britain.”  It is impressive that the Gaulish gods, of whom we often know so little (other than their names and the likely areas in which some of them were worshipped), receive such attention and devotion in Hearthstone’s works.

Each poem is roughly the same length, and serves as an invocatory prayer, often beginning with, including, or ending with the phrase “I call to” the deity in question, or the second-person singular pronoun “you.”  For many modern pagans, polytheists, and culturally-specific polytheist reconstructionists, these invocations might be used in ritual settings for the deities in question, or for daily devotional purposes for those who have (or wish to start) relationships with any of these deities.

Most of the Welsh deities are fairly well-known, as are the Irish — though both Fand and Be Binn might only be known to those who are more directly familiar with medieval Irish literature.  There are many familiar names amongst the British and Gaulish deities, as well as some of my own personal favorites from these pantheons (e.g. Cocidius, Coventina, Epona, The Matrones, Nehalennia, Ogmios, and Sulis, amongst others!); but, there are also large numbers of this latter group of deities that have probably had hardly a word spoken in their praise for a millennium-and-a-half or more, including Ucuetis, Meduna, Erecura, Bergusia, and Alaunus, to name only a few.  Not unlike the stone inscriptions which contain these deities’ names, and the pieces of statuary that may depict some of them, these are “fieldstones” that have turned up but have all-too-often been forgotten or ignored by modern scholars as well as modern devotional polytheists.  This is an admirable effort at bringing these deities’ names to a wider potential audience for devotional attention.

It is also a rare feat to include poems to Lugh, Lleu Llaw Gyffes, and Lugus in one volume without them bleeding over into each other, and the personality or feats of one of these deities being used (or often confused!) for another of them in their culturally-distinct and separate mythic and cultic manifestations.  The effort with Ogmios (Gaulish) and Ogma (Irish) is not quite as effective, as the latter — though credited with creating the ogam alphabet, is known more as a warrior deity than a deity of eloquence, and there is no evidence that he was considered a poet or a sage amongst the gods.  The ogam alphabet was specifically envisioned in myth as a code from one warrior to another in warning, and as a system of writing messages upon wood, it is a method involving direct violence, with knives striking marks in wood.  Though poets and sages knew and used ogam in the medieval period (often as a code amongst themselves, free from scrutiny by the eyes of continental monks reading the same manuscripts), it is not often associated with poets in the mythological tales.  That Ogma has the ability to make mute objects — stones, staves, and swords — speak via this form of writing (and, in Cath Maige Tuired, perhaps it’s simply inherent in him, or in the sword that he happened to recover from the Fomoire king Tethra), that is somewhat different than the work of a poet, who doesn’t make other objects speak so much as speaking for nature, the gods, and other humans.

My only other major critique of the collection — but one that should not detract from its overall worth, nor for any potentially interested party’s decision to purchase it! — is that in the extensive “About the Gods” section that ends the book and comprises roughly its final twenty pages, there is what I would consider a consistent mistake in the rendering of one particular phrase:  Tuatha Dé Danann.  Too many modern writers do not take the “Dé” seriously there, thinking it perhaps a Latinate preposition, when in fact it is the word “God” or “Gods” in the context of the translation of the phrase “People/Tribes of the Gods of Danu.”  In the entry for Danu in the glossary, it is translated simply as “People of Danu” (p. 113).  A few further matters of Irish and Gaulish orthography could occasionally use some nuancing as well.

As I said, though, the latter is a small matter, and will not detract from the overall effectiveness, nor beauty and power, of this collection of devotional poems.  I highly recommend it!

[P. Sufenas Virius Lupus is a metagender person, and one of the founding members of the Ekklesía Antínoou–a queer, Graeco-Roman-Egyptian syncretist reconstructionist polytheist group dedicated to Antinous, the deified lover of the Roman Emperor Hadrian, and related deities and divine figures–as well as a contributing member of Neos Alexandria and a practicing Celtic Reconstructionist pagan in the traditions of gentlidechtand filidecht, as well as Romano-British, Welsh, and Gaulish deity devotions. Lupus is also dedicated to several land spirits around the area of North Puget Sound and its islands.