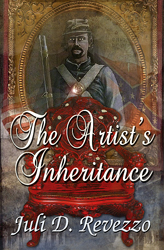 This issue, we sit down with supernatural fiction author Juli D Revezzo. A member of the Independent Author Network, Revezzo’s works have appeared in Luna Station Quarterly, Twisted Dreams Magazine and — yes — Eternal Haunted Summer. Here, Revezzo discusses her new novel The Artist’s Inheritance, and why Florida is such a great place to set a spooky, Gods-rich story.

Eternal Haunted Summer: How would you describe your personal spiritual path?

Juli D. Revezzo: Well, I don’t think it’s what most would see as “normal”. I don’t do ritual, as some might. What I do is more like communing with the gods in a family or sometimes muse-esque type relationship. So my writing in itself is the ritual. From time to time, I also delve into the more plastic arts; for instance I’ve been known to sketch scenes out (have no talent with that! LOL) or make stuff with beads to help visualize my stories. The necklace the goddess Arianrhod gifts to Caitlin at the end of The Artist’s Inheritance, is a good example. I had to actually make the thing to understand what she was offering.

EHS: What do you find so compelling about supernatural fiction?

JDR: I like the otherworldly aspects of it, how there’s always at least one character in the stories who doesn’t quite fight against the supernatural. They seek to understand it more than to defeat it.

EHS: And how do you distinguish it from fantasy or paranormal literature?

JDR: Oh boy. You know, so many of the elements cross the lines into one another I think it’s hard to distinguish them from one another anymore.

EHS: What are some of your favorite works of supernatural fiction? The books or short stories on your must-read list?

JDR: From time to time I enjoy the darker side of fantasy fiction: Tanith Lee, for instance and Michael Moorcock has some great dark and supernatural themed novels that are a great influence on me. Moorcock’s Von Bek series for instance. Also H.P Lovecraft has definitely had an impact. The Dreams in The Witch House, Call of Cthulu and the like. I also enjoyed Dione Fortune’s Secrets of Dr. Taverner and, of course, Poe. I think all those tied into my works.  Most of my leanings in that direction, I have to say, the influence, came via my little brother. He loved Ghost Hunters and horror movies and the like and I ended up channeling his like more and more in recent years, mixing it with my own love of mythological and supernatural realms.

EHS: Do you have any suggestions for other writers hoping to self-publish?

JDR: I could suggest a ton of helpful websites and books to peruse. Joel Friedlander comes to mind and his site, Youtube videos, and insight are great resources. Also Joanna Penn’s site offers some great tips.

The second bit of advice I’d give is that you don’t have to spend an arm and leg in this endeavor, but make sure you have at least a couple critique partners to go over your work before you hit upload. You don’t want some embarrassing snafu living in someone’s Kindle, after all!  If you know what you’re doing you can DIY a lot of the tasks and save money; if you can, do. But know everyone and their mom has an opinion, and they will give it to you whether you want it or not! Quite frankly,  no one knows how your path will lay itself out, just in the end, do what you feel is best. Also realize you will get grief about it.  However, if you grow a thick skin and you believe in yourself and your project, by all means do it.

EHS: The Artist’s Inheritance is set in Gulf Breeze, Florida. Why Florida?

JDR: Well, it seemed logical. I’m a Florida native and far too few stories are set here, or set here fairly. People tend to make us out to be one big retirement home or a tourist trap and how unfair that is. So I thought, why not? 🙂

For another, I’d always wanted to write something dealing with the Civil War. Now, Santa Rosa Island sits right off Gulf Breeze and the little island holds a Union fort from the early days of the Civil War, Fort Pickens. A Union base, right off our shores and I had no idea! It seemed perfect. So in The Artist’s Inheritance I tried to draw Florida as I see it, and it seemed logical to make Fort Pickens the base for an ancestral, gentleman ghost who comes and helps Caitlin deal with her trials. While he’s part of the family that angered the gods, he’s trying to help her and his descendents make amends.

EHS: Okay, I have to ask: where did you come up with the idea of a haunted chair?

JDR: In its earliest form, at its heart, it was a muse-artist relationship story, but I didn’t want to write a painter, or a writer as it always seems the first art forms writers write about. I wanted something different. So I thought, what kind of object might a god really want to take home with him or her? A throne seemed perfect, so I set about having Trevor’s obsession deal with carving a throne-like chair. Who knew it would end up driving him insane? 😉

Truthfully I think that came from the story of Camille Claudel. (A French sculptress in the 19th century who was involved with Rodin and went mad.)

EHS: What kind of research went into The Artist’s Inheritance? Were you surrounded by stacks of books?

JDR: You can see into my office, can’t you? hehe. Yes, I am surrounded by books, of all kinds: fiction, non-fiction, mythology. At the time I started writing the novel I was deep into The Mabinogion. I think I’d read it cover to cover three or four times, so it was natural to include those gods and the idea of the geas. While I took a few art classes in school as I pursued my art history degree, aside from one clay sculpture assignment, I’d never personally carved anything. So, I poked around websites and books, and watched a few PBS shows trying to get Trevor’s work and tools just right.

EHS: The Artist’s Inheritance is the first book in the Antique Magic series. How many books will there be, and can you give us some hint as to what will happen in those future volumes?

JDR: At the moment, I don’t know how many there will be. I plan on five but we’ll see how that pans out.  The second novel, Drawing Down The Shades, should be out as early as mid-February but hopefully before the spring equinox. It deals with Caitlin and Trevor’s new antique shop, and a figurine that is tied to the disappearance/possible death and ghost of a ’60s sculptress. Your readers can check out the progress on those projects at my website.

EHS: You also contributed the short story “What Sekhmet Keeps” to Dark Things II. How did you come to be associated with that anthology?

JDR: The editor, Patty G. Henderson, and I have been good friends for over fifteen years. I missed the first edition of Dark Things, so when she told me she was considering doing a second I jumped at the chance, sat down and wrote “WSK” for her.

EHS: What is Twisted Dreams Magazine?

EHS: Where can curious readers buy your work?

JDR: My books are available at Amazon, Barnes and Noble, and Smashwords. Also, The Artist’s Inheritance is available in paperback. Should anyone wish it for gift giving, they can find it at Createspace.

JDR: In October, I released an expanded version of my first EHS story House of Cards. Meanwhile, I sold a paranormal romance novel featuring a warrior of the Tuatha dé Danann to The Wild Rose Press and hope to see that out before the end of 2013. I’m also toying with an epic style dark fantasy and a follow-up to House of Cards. I also recently sold a new short story to EHS. 🙂

EHS: Which book fairs, conventions, or other events will you be attending in the foreseeable future?

JDR: You know? I’m not big on public events, so at the moment I don’t have any plans in that direction. Plans may change though, you never know.