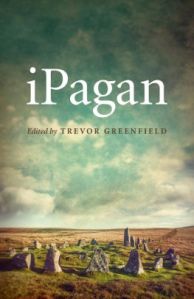 iPagan edited by Trevor Greenfield is a beast of a book. At a whopping 600 pages according to Kindle, it is one of the biggest tomes on pagan writing that I’ve seen that’s not from one of the heavy-hitters in the genre. Made up of dozens of personal essays about neo-pagan practice; organized around five broad categories of Druidism, Shamanism, Goddess Spirituality, Witchcraft, and Paganism Today; there is something for everyone here — which is both good and bad. One of the perks is that there are so many topics covered, I would be hard-pressed to find someone who didn’t resonate with at least one essay, but at times the sheer breadth of the book seems overwhelming — and even a little cluttered.

Let me start off by saying one thing up front: I loved this book. Utterly and completely. But I’m a giant nerd who is an absolute huge fan of the personal narrative genres. I love everything from literary autobiographies written by Joan Didion to the short personal stories that grace Chicken Soup for the Soul and everything else in between. My PhD dissertation is on trans narratives — which basically means I research a tiny, tiny subset of life writing as it pertains to trans people as a whole. I love personal narratives, basically. They are fantastic, and it was so refreshing to see an anthology devoted so completely to the art of spiritual memoir writing — effectively the pagan version of Chicken Soup for the Soul. I love that.

But I’m also highly aware that not everyone will appreciate my Chicken Soup for the Soul comparison, either. It sort of has a bad reputation, doesn’t it? One of the essays in iPagan itself is from an author who is upset that their writing is miscategorised as self-help (“yuck!” according to them) and alongside titles like Chicken Soup for the Soul. I was already halfway through the collection before I made the connection between iPagan‘s bite-sized pieces of narratives, often around a single theme, to the similar ones I’d read before in the Soup collections I had, but I was looking at it as a positive thing. To feel this kind of push-back from the very anthology I was reading was odd. And it got me on the defensive. Like the romance genre (which I also love), the personal narrative is sometimes seen as vapid and ill-conceived — even by people who write within that genre itself.

But that is simply not the case. In fact, the narratives in iPagan are often extremely well structured. They are short, so they get to the point right away and often drop very startling conclusions, or revelations, in the reader’s lap — again, another tactic of Chicken Soup. The only difference here is subject matter. I understand the upset of having your work miscategorised (and as a sci-fi writer, it’s happened a lot), but I really don’t think that has happened here. And I don’t think it’s a bad thing to be slotted alongside Chicken Soup or books like it. Some of the ending revelations in iPagan left me thinking for long afterwards. Ken Day’s essay in the Shamanism section blew my mind, specifically when he talks about having more than one soul. I put the book down and thought about his grandfather’s line for several minutes. I still think about it now. It’s a form of self-help, for sure — even if it explores the concept of the ‘self’ using different language and different symbols.

There are other essays from the collection that still cause me to go, “Huh. Neat. Never thought of it that way.” And that’s the exact goal of most of these stories — and Chicken Soup itself. The editors often encourage an atmosphere of reflection and silent contemplation after each story; of sharing and passing on ideas. There are other essays in iPagan that match the ethos of Chicken Soup in tone, like the overtly sentimental treatment of family and learning. Or there are others which are just neat stories for ‘insiders’ in the community, like Sheena Cundy’s essay about pagan writing and her novel The Madness and The Magic, which I’ve read (and reviewed) before. There are also several essays that challenge the reader to think beyond what they think they know. This happens most frequently in the last section about Paganism Today, and especially in essays that tackle sexuality and gender in the pagan community.

What I think I’m trying to say, especially with my comparison of iPagan to Chicken Soup for the Soul, is that this genre is great. It can be well executed and appreciated. And the topics it covers are wonderful and fantastic. But a book like iPagan, and the community it strives to represent, can only go as far as the company it keeps. And if we actively reject other genres of writing, and the people attached to them, then we’re going to be in the dark ages for a lot longer than we need to be. And our books won’t be read, when they really should be.

[Evelyn Deshane has appeared in Plenitude Magazine, Strange Horizons, The Rusty Toque, and Lackington’s. Their chapbook, Mythology, was released in 2015 with The Steel Chisel. Evelyn (pron. Eve-a-lyn) received an MA from Trent University and currently studying for PhD at Waterloo University. Visit them at: evedeshane.wordpress.com]