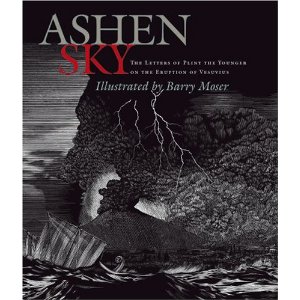 This book was first recommended to me by one of my Latin tutors. I was about to begin a graduate course in the Letters of Pliny the Younger, and she thought I might find this book interesting since it isn’t every day that you get a children’s book based on a pretty accurate translation of an ancient Roman’s personal correspondence!

As a child, I was fascinated by the story of Pompeii. The highlight of visiting Italy for the first time was actually getting to visit Pompeii, too, a humbling experience (and terrifying — if ever I doubted my commitments as an animist, that doubt was put to rest the first time I saw Vesuvius looming in the distance as we drove to Pompeii. That mountain is alive, aware, and seemed to me hostile. If I lived anywhere near it, I’d be making offerings on a regular basis. It inspired something very near to a holy terror in me). Now we know the details of Pompeii only through two surviving letters from a Roman estate lawyer, Senator, and writer named Gaius Plinius Caecilius Secundus or Pliny the Younger (his uncle was also named Gaius Plinius Secundus and was a prolific writer too, though not much has survived outside of his Natural History. We call him Pliny the Elder). Pliny the Younger witnessed the eruption of Vesuvius from a nearby town, and indeed lost his uncle in a rescue effort.

Pliny was a colleague and friend to the Roman historian Tacitus. When Tacitus was writing his history of Rome, he asked Pliny for an account both of the eruption and of his uncle’s untimely death. Pliny responded with two extensive letters detailing everything he remembered. Ironically, only Pliny’s letters survive. We don’t have that part of Tacitus’s history so we don’t know what if any use he made of his friend’s epistolary account. This book is based on those two letters.

Ashen Sky begins with a brief introduction detailing what happened on August 24, 79 C.E. both in Pompeii and its neighboring city of Herculaneum. It continues with a brief but devastating account of the volcano’s course throughout the event. Then the author provides us with clear, concise biographies of Pliny the Elder, Cornelius Tacitus, and Pliny the Younger.  Finally, we have the two letters, from volume six of the ten surviving books of letters Pliny authored. The letters concerning Vesuvius, written at the request of Tacitus, are letters 6:16 and 6:20 respectively.  These letters are reproduced in English in their entirety including the traditional numbering system of the sentences common to contemporary publications of Latin texts.

The accounts themselves are haunting. Pliny’s training as a lawyer and rhetor comes out in the clarity and conciseness of his descriptions, but somehow that only serves to heighten the dramatic effect, particularly when he breaks off the first letter just as he is about to elaborate on how he and his mother were coping during the eruption itself, with his uncle gone on an ill-favored rescue attempt. He certainly understood the use of the dramatic pause!

The translation is a good deal more than serviceable and this was a delightful surprise. I read this side by side with the original Latin because that’s the kind of person I am! These are important letters and I was hoping that the translator would at least manage to capture Pliny’s style, which is quite delightful and accessible, if perhaps not being as truthful to the original Latin as I would like. I was pleasantly surprised on both counts. The translation is very consistent with the original Latin, more so I think than any other translation that I’ve read, and translator Benedicte Gilman manages to keep the pliancy of Pliny’s style as well.

The artwork, wood engravings by artist Barry Moser, is powerfully evocative of the claustrophobic horror that must have been Pompeii during the eruption. They seem almost snapshots in time: stark, raw, and dark. They tell the story almost by themselves. This, in fact, seems to be the point of the book: it is a showcase for Moser’s remarkable craft.

I don’t think this is a children’s book per se. I think it’s a powerfully illustrated edition of two of Pliny’s letters that children may also find interesting. Certainly, I think the woodcuts are too disturbing for smaller children and the text is too complex. That being said, older children, perhaps ten and up, might enjoy it, particularly if they also have an interest in Pompeii. Overall, I think this is an artbook for adults.

My only real quibble with the book is that I would have liked a bio of the translator as well as the artist because frankly, while I know making wood engravings requires skill and craftsmanship, I also know what goes into crafting a good translation and this translation was beautifully done.  I give this book four out of five stars.

[Galina Krasskova is an ardent devotee of Odin and has been a priest since 1995. She is a Northern Tradition Shaman, whose primary focus is encouraging and developing a tradition of Heathen devotional work. She is the author of several books including Exploring the Northern Tradition; The Whisperings of Woden; and Sigyn: Our Lady of the Staying Power. Krasskova is currently at work on a devotional for Kali (she owes Her a debt). She holds a diploma in interfaith ministry, a Masters degree in religious studies and lectures frequently throughout the US. She may be contactedhere.]

Eternal Haunted Summer is now open to submissions. The theme for our upcoming Winter Solstice 2020 issue is “Ekphrasis.” Please be sure to include the image (or a link to the image) which inspired your submission. The submission period closes on 1 December 2020, with all notifications sent out by 10 December.