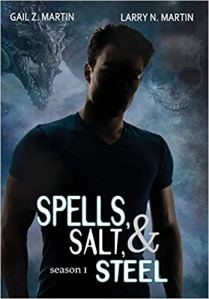 Mark Wojcik is a monster hunter. After most of his family was slaughtered by a wendigo, Mark took it upon himself to protect the people of his community (middle-of-nowhere Pennsylvania) from the things that go bump in the night. Ably assisted by Father Leo (a member of the super-secret Occulatum), Blair and Chiara (his best friends since forever), and a handful of local police who are “in the know,” Mark takes on monsters, creatures, ghosts, spirits, tulpas, and even the Wild Hunt. Unfortunately, he’s so good at his job that he has begun to attract the attention of other people who are “in the know” and higher up the food chain than him — like, say, the CIA and the Vatican ….

I am perpetually on the hunt for new urban fantasy to read. Ideally, urban fantasy that is both well-written and Pagan-friendly. For the most part, Spells, Salt, and Steel fulfills those requirements.

I really like Mark. He is not some tough, badass alpha male who can do no wrong. He’s an ordinary guy who suffered a horrible tragedy and now does what he can to spare others from the same pain. It’s his fight so that it doesn’t have to be anyone else’s fight. He’s also careful in what and how he kills. There is a difference between a supernatural critter that is just doing it’s thing and can be safely relocated away from people, and a supernatural monster that willfully hurts people because it wants to hurt people.

All of this makes for some exciting action sequences as Mark is forced to think on his feet and (hopefully) save the day. Thus the well-written part.

Spells, Salt, and Steel is kinda-sorta Pagan-friendly. Mark himself is Catholic. Though no longer a devout, weekly church-goer, he still believes. And Father Leo is a shining example of devotion, his faith in a higher power lending his prayer-spells extra power. The creatures he faces down, though, hale from a wide variety of traditions and cultures: Japanese ningen, Hungarian shubin, a Tibetan tulpa, and even Perchta and the Wild Hunt. While the original cultures and their beliefs are treated respectfully, there is never any doubt that Mark (and his Catholic faith) will triumph. The Christian God and his earthly Church are at the top of this particular food chain.

While Spells, Salt, and Steel is part of a larger urban fantasy universe, it can be read as a stand-alone novel. If you like it, check out Martin’s Deadly Curiosities and Night Vigil series.

This book is a heck of a lot of fun. There’s action, explosions, magic, narrow escapes, and a wide variety of supernatural beings. It’s a quick and entertaining read, perfect for the commute to work or while waiting in the doctor’s office. Recommended to fans of Clara Coulson, Helen Harper, and Devon Monk.