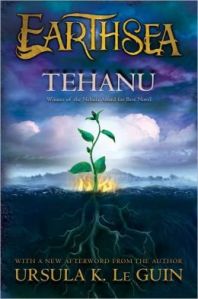 It’s no secret that I’m a hardcore Earthsea fan, as well as a huge fan of Ms. Le Guin and her writing. By far, however, my favorite book in her 6-book Earthsea cycle is definitely Tehanu. It is a story of loss, tragedy, love, and rediscovery. It is a story of a magical and powerful little girl, who, brutally abused by the people of her village, comes into the arms of a lonely and abused woman, who had once been the friend — and, in her heart — the lover of a powerful mage. Together, the woman and the child unite to help one another overcome obstacles, fears, and dangers in their respective lives, ultimately moving towards an exciting and dragon-filled climax that reveals their destinies to both of them. Throughout, the reader is treated to more legends from the thick, well-developed culture of the Earthsea islands, eloquent descriptions of nature, and tender recollections of the ex-archmage Ged as he navigates the mountains of his youth once again.

This book is beautifully written and flows like wine into a thirsty throat. Each paragraph and each sentence feels carefully weighed, like ivory counters in a purse, to paint such a precise and moving picture of the daily life and woes of the widowed woman Tenar and her adopted daughter Therru — later to become Tehanu — as they try to escape the evil men and mages trying to squelch them in their pursuit of liberty and knowledge. Therru has been brutally attacked by the people of her village, including her own father, and it becomes Tenar’s duty to lead the child to a safe place where she can blossom into the magician she truly is. They eventually enlist the help of Ged in defending their and the child’s right to live a happy life.

The action in this novel is powerful and amazingly paced. The reader never feels at a loss for action, and no part of the book ever feels bogged down or boring. The entire thing progresses quickly, enough that the reader’s blood is boiling and is engaged with the flight of the characters, but the pace is also metered enough that we experience lots of lovely moments with the motley family as they try to piece together a life for themselves. The love between Tenar and Ged is heartfelt and tender; the love, likewise, between Tenar and Therru is displayed simply and sweetly, a gift unto the reader’s concerned consciousness. The emotions and actions of the characters are all very “real” here — the story itself leaps off the pages, alive as the dragons we see in the sky, especially as the novel drives deeper into the truth of Earthsea’s magical history.

The ending of the novel will shock, stun, and satisfy the reader. It came as an unexpected result to me, but no doubt is the most fitting way the novel could possibly end. It is bittersweet but also holds the promise for happiness and a deliverance of justice to the realm, and is especially satisfying to someone who’d been rooting for the little family that is comprised of Ged, Tenar, and Therru.

I’d recommend this book to anyone who enjoys well-metered, deep, and provocative fantasy. It is generally a book shelved in the children’s section of the library, though I would not recommend it for children because of the content and connotations of some parts of the book. Certain words are used and certain adult actions occur that I wouldn’t want children reading about. This book is probably appropriate for older teens and adults — and it’s worth the read.

[Belle DiMonté is an avid reader of fantasy and linguistic texts.]