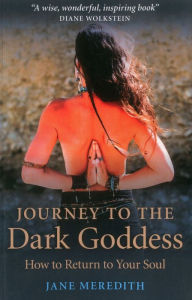 Journey to the Dark Goddess is a workbook. Now, I have to admit that I have kind of a love/hate relationship with workbooks. Every now and again, one finds its way into my hands. I will read them and do the occasional exercise or ritual, or take some inspirations for my own practice, but I never follow the whole workbook.

This book was an exception.

In Journey to the Dark Goddess, Jane Meredith takes the myth of Inanna’s Descent into the underworld as a framework for a series of rituals. They are designed to take the reader, if s/he is willing to follow them, on a journey into the underworld. In parallel to Innana’s story, the myths of Psyche and of Persephone are discussed and help the reader to understand the journey.

The first part of the book is about preparing the Descent and includes not only looking towards the dark realms, but also organizing a back-up to help find the way back again. The second part is the Descent, a passing through seven gates, a surrender, probably the most difficult part of the journey. The third part, in the underworld, is where the Dark Goddess is encountered – “the heart of the mystery”, as Jane Meredith put it. This is where change can happen, where the Descent turns around and the Ascent back to the upper worlds begins. Coming up from the underworld is described in part four and is as important as the other three parts. Each part contains two rituals and the invitation to create a map of the journey; the third part (in the underworld) includes several more exercises.

There are several things I liked about the book. It is well structured and focused. Rather than a collection of exercises for a bunch of related topics, the exercises and rituals build upon each other and form a coherent experience. Meredith enriches the chapters with her descriptions of her own journeys into the underworld and back up again.

The book came at a time when I was already partly on the journey down and I felt unable to come back up again. Doing the rituals allowed me to acknowledge where I stood and to go even deeper. There I could experience a turning point that allowed me to find my way back up again. (On a funny side note, in the following months I was encountering pomegranates everywhere, a symbol to remind me that I had taken the return journey and was back again in the upper realms.)

The most inspiring part has been the invitation to create a map of the journey included in every chapter. There is something in the book that compelled me to pick up some chalks and start drawing instead of just writing in my journal, something I have not done in more than twenty years. To some extent, the inspiration to draw has been with me since then, for which I am deeply grateful.

One point to note is that the book is aimed at women. Innana, whose myth is followed in the course of the book, and Psyche and Persephone, who inspire the journey, are all Goddesses. While probably possible, I think it will be way more difficult to work with this book for men.
Altogether, Journey to the Dark Goddess is a book about shadow work that I can wholeheartedly recommend. Its sequence of rituals can be performed again when life throws the next challenge in our way. It is not an easy book to work with, and it might be a good idea to have some support when embarking on the journey, but I found the book both inspiring and healing.
[Bettina Theissen is a practising Wiccan, avid reader, and occassional poet and writer who lives with her two kids and her husband in Belgium. She is the author of A Sacred World: Divine Encounters and has contributed to Bearing Torches: A Devotional Anthology to Hekate published by the Bibliotheca Alexandrina.]