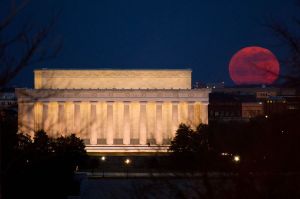 He glanced up from his work. Not long—a mere fraction of a second. He took in her brilliant, shining face…and shrugged. “So?”

“But don’t you see?” She preened before him. Do you see anything different about me?”

“Not particularly, no,” he said.

“Big, and bright?” Could he really not see the difference?

“I’m not so distracted to fall for that,” he said. “Dad said any answer to a question like that could get me into trouble.”

Again, his sports consumed him more. Damn, Olympia! she thought.

“Whatever you say,” he said.

“It’s a rare thing; not to be seen again.” Silvered sparkles streamed from her long, luminous locks.

“What do you mean?” He left his games aside, his lip quirked in annoyance. “You looked like that last month, and a few months ago. So what’s so big a deal, Moon? You’re not really all that super and special. You’ve happened too often to be rare. Twice within the last year, in fact.”

Moon narrowed her eyes, trying to fight back tears. How dare he? “I’ll show you!” she said.

Furious, she retreated outside, and perched her bright beams on a Southern branch where she whiled away the night, sulking. Wondering, if he didn’t see would anyone in this whole, wretched modern world? Would they notice that the moon — for the first time ever — set in the South?

[Juli D. Revezzo has long been in love with writing, a love built by devouring everything from the Arthurian legends, to the works of Michael Moorcock, and the classics and has a soft spot for classic the “Goths” of the 19th century. Her short fiction has been published in Dark Things II: Cat Crimes, The Scribing Ibis, Eternal Haunted Summer, Twisted Dreams Magazine, Luna Station Quarterly, and Crossed Genres‘ “Posted stories for Haiti relief” project, while her non-fiction has been included in The Scarlet Letter. She has also, on occasion, edited the popular e-zine Nolan’s Pop Culture Review… But her heart lies in the storytelling. She is a member of the Indie Author Network. Her debut novel, The Artist’s Inheritance was recently released. Visit her here.]