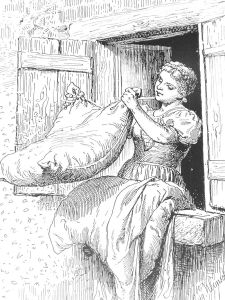 Frozen mist hung in the air and coated pine trees in a rime of spiky ice. Throat raw from yelling, Hestia wiped frozen tears from her lashes and beat the broken end of Griffin’s leash against a trunk.

“Griffin, you stupid dog, where are you?”

The faint echo of an excited bark came from some far off point in the forest.

Dropping the useless leash, Hestia filled her lungs with a chilling breath of directionless frustration. Lost husband, lost dog. It figured. Griffin was supposed to be his pet. The chocolate lab he’d just had to have. Another bark rang high pitched and eager–the sound pushed her into a jog.

Inside the thickening woods, sparkling ice crystals tumbled off pine needles, frosting her clothes. Following the trail of random barking through the forest, Hestia bore the tugging of branches like everything else that seemed to pull at her lately. Kids, bills, her soon-to-be ex-husband’s damn divorce lawyer calling and calling. She was raw, worn to a raveling.

A clearing revealed an old homestead. The remains of a stone chimney leaned at a disastrous angle, hanging over the rusted ruin of a wood stove in what must have been a tidy home. It looked how she felt. Lost and forgotten.

“Griffin?” She hadn’t heard any barking for at least ten minutes. Yelling his name, she took a step and the ground sagged. It took her weight for the barest of seconds before giving way, pitching her into darkness. A second or two of terrifying free-fall and she landed with a splash. Cold lanced her, snatching breath from lungs with frozen claws. Kicking furiously, she struggled as water filled her clothes with a killing weight.

The image of her children getting off the school bus and finding the house empty sent her into a fury. Nails tore to the quick as she tried to climb slippery walls. When the coppery smell of her blood tainted the water’s cold stone scent, she cried out, screaming despair. Every muscle shook with the pain of keeping warm and she felt herself slipping under, water seeped into her mouth. A bright light flashed from above or maybe from somewhere inside her head.

The world flipped upside down.

Suddenly falling in a tangle of dead branches and water, she landed with a splash in a frozen wasteland. A quick shine of ice formed on her coat and bitter cold froze her hair into lank brown icicles. Her hands were mangled and turning a distressing shade of blue.

The well’s mouth was above her head, hanging in the air like a threat. Scrambling off the ground with a crackling of ice, she stumbled away from the bizarre hole in the sky.

Miles of crumbling snow drifts covered fields in all directions. She wasn’t any place she knew. Except. The chimney on the tidy cabin not a hundred yards away looked familiar. Like the ruin she’d seen before she fell down. Up? Hestia shook her head. Aching with cold, she shuffled to the door. If she didn’t get warm, it was certain she wouldn’t live long enough to figure what had happened.

Before she could even knock, a latch flipped and the planked door creaked open. One blue eye peered at her through a crack.

“Yes?” The voice sounded like thunder on a sunny day. Dangerous and beautiful at the same time.

Hestia clasped trembling hands together. “Please, I’m freezing. Can I come in?”

“Mmmm.” The door opened and the ugliest woman Hestia had ever seen limped onto the porch. A long nose hooked over crooked teeth worn with years of chewing hardy food. The elderly woman wrapped a delicate shawl around her bony shoulders and Hestia shivered to think of the warmth of it. The elderly woman’s features were stark to the point of cruelty, but her clothing was beautiful, delicately handcrafted. She’d never seen its like.

The woman caught her admiration and chuckled. “Do you spin?”

“No one spins anymore,” was the muttered response. She turned to go back inside. Over the old woman’s shoulder was the welcome heat of a well-stoked fire and the one-room cabin was chaos. Yarn and herbs hung from the ceiling next to a curing ham. Pine-cones and dirt covered the floor. It was more wild inside the cabin than outside. Hestia cataloged the mess and made a quick decision.

“If you let me in, I’ll clean your house.” The words came in a rush.

“That’s what I do, clean houses for a living. I’m really good at it.” Her teeth chattered, chopping words into awkward bites.

“Are you?” The old woman narrowed her eyes. Taking one of Hestia’s clawed hands in hers, she spread the fingers wide, exploring calluses developed from years of cleaning. Clear blue eyes searched every inch of Hestia and paused to appraise the base of her throat. The old woman touched the pentagram pendant she always wore.

“It was a gift from my mother.”

“She was a Wiccan.” Hestia could hardly think, her brain was icy.

The grip on her hand tightened, pulling her inside the cabin. “Good enough, daughter of a witch. Call me Mother Hulda.”

The heat of the cabin took all thought. Hestia gave Mother Hulda a vacant nod as she was tucked into a quilt the color of a winter sunset and fell into a deep sleep.

The rich smell of warm bread woke her. She was deliciously comfortable and still wrapped in the thick quilt. Night watched from the windows, reflecting a view of Mother Hulda working at a spinning wheel. Nimble fingers caressed tufts of wool into order, tangling the fibers together into yarn.

Push, push, push, tapped the pedal at the base of the spinning wheel. The rhythm reminded Hestia of a beating heart. The sturdy tempo was relaxing. She closed her eyes and opened them when Mother Hulda cleared her throat.

“If you’re awake, I need bread taken out of the oven.”

Hestia yawned. She felt like she’d slept for weeks. Rolling off the couch, she folded the quilt and draped it over the back, giving it a pat of thanks for the welcome rest. The dirt floor crunched under her shoes as she picked up a towel grab the oven’s scorching handle. Heat boiled out of the oven–red coals had been pushed to the sides to make room for three large rounds of bread. The ends of Hestia’s hair curled in the fragrant steam as she set the loaves on a table to cool.

It felt like a dream. Tying up her hair with a bit of string, she rolled up her sleeves and lost herself in the rhythm of cleaning. Cobwebs and pinecones were no match for the power of her broom. She boiled water and sprinkled it with dried lavender blossoms before scrubbing everything that wasn’t Mother Hulda or her spinning wheel.

Unlike her dumpster fire of a life, here was something she could control. Hestia took the cabin’s mess and set it right. By the time she was rubbing the kitchen table with a cube of softened beeswax, she found herself smiling.

The tempo of the spinning wheel slowed. “Nothing like hard work, yes?”

Hestia startled and dropped the wax. She’d forgotten Mother Hulda was there.

“Yes. I feel…” she looked to the window and found it awash with a blush of pink. “Wait. What time is it?”

Panic seized her. What about the children? How long had she been gone?

A hand reeking of lanolin rested on her shoulder. “Peace. Your sons are fine, Hestia.”

She blinked; she’d never told the old woman her name.

Keys on Mother Hulda’s belt jingled a merry tune as she crossed the room. “Before you go, I need you to fluff my mattress. It’s so lumpy and too heavy for an old lady like me to lift.”

Hestia doubted very much there was anything Mother Hulda couldn’t do.

Lifting the over-stuffed bag of feathers, Hestia gave the whole thing a smart snap. Snowflakes burst into the air, freezing her fingers. Clouds of her breath floated over the bed and melted in the fire cooked air of the room.

Steeling herself against the pain, Hestia shook the mattress until a blizzard of flakes blew around the room. As snow settled onto the bed, Mother Hulda flicked the sunset quilt over the top.

“Warm your hands by the fire and I’ll send you home.” A generous smile split the wrinkly crags of Mother Hulda’s face. She sounded pleased.

“I don’t know where home is.” Hestia felt tears brim in her eyes and let them fall. What did it matter if she went home? She didn’t have enough money to pay the bills or fight in court for custody of her children. And that dog. Griffin. He was gone for good, she was sure.

“But your sons. They need you.” Mother Hulda surprised her by speaking to what she’d thought.

Soothing Hestias’ chapped hands with the lanolin left on her own, Mother Hulda tucked Hestia into her thawed winter jacket and wrapped a rough spun scarf around her neck. As sunlight rose above the trees, they walked in silence to the well-hole in the sky. Grabbing the lip of the well with one hand, Mother Hulda took a handful of Hestia’s scarf with the other, winding the brown tufts around her fingers. She paused and smiled.

“Never fear, daughter of a witch. But, listen now. I can only send you most of the way back. You’ll have to do the rest of the work by yourself.”

Hestia nodded even thought she didn’t understand. Somehow Mother Hulda had changed things. She smelled of beeswax and lavender and that seemed right. Clean and new. “Thank you.”

With a strength that said she could have easily fluffed a thousand mattresses filled with snowy feathers, Mother Hulda tugged Hestia off her feet and tossed her into the well.

Hestia crashed into darkness, tumbling like a sock in the dryer, banging into the sides of the well until she grabbed at the lip. Brick crumbled as she scrabbled for purchase. She kicked a desperate hole into the wall and balanced on one foot while pushing with all her might. Muscles straining, she yelled and hauled herself out of the abandoned well.

She rolled clear and lay flat on her back staring at the blanket of fog that covered the sky. A happy bark made her sit up. Tied to a tree not six feet away was Griffin. The Labrador danced on his hind legs, thrilled to see her. A new leash looped around the trunk several times and there was something about his collar that shone.

Not trusting herself to stand, she crawled to her stupid wonderful dog and hugged him until he shuffled his feet and whined. Griffin danced out of her grip and she snagged the collar, holding him steady. Cold metal caressed her bloodied fingers.

A voice lighter than the wind whispered, your actions define you, daughter of a witch. Hard work has its reward.

[Trace Kerr has appeared in Enchanted Conversation and when she isn’t writing YA fantasy and science fiction, she co-hosts and produces the Brain Junk podcast in Spokane, WA. Her website is TraceKerr.com and you can also reach her on Twitter as @teakerr. Listen to her podcast about everything you never knew you wanted to know at BrainJunkPodcast.com.]